Is Congress about to pass the first significant privacy-protection legislation since 9/11?

Right now if you store any information in “the cloud” for longer than 180 days, the government does not need a warrant to search it, only a subpoena, which does not require judicial approval. This means all those emails in your inbox from last year, the Google Docs that you’ve been working on for a while, and everything you have saved in your Dropbox are essentially not covered by the Fourth Amendment to the Constitution.

How this is possible? It’s because when the law governing this, the Electronic Communications Privacy Act (ECPA), was written in 1986, five years before Tim Berners-Lee had even invented the Internet, and has not been updated since. It was written at a time when no one ever conceived that email or data would be stored online; after all you had to connect via a dial-up modem to get information displayed in one of 16 colors available on your computer monitor. If information was left online for an extended period, it had likely been forgotten or abandoned. But today, the ECPA allows that, in theory, law enforcement need not go through a judge in order to go through your inbox.

The disconnect between statute books and modern life has led to a bipartisan push to update the law. The ECPA Amendment Act, co-sponsored by Sens. Patrick Leahy (D-VT) and Mike Lee (R-UT), would extend the warrant requirement to communications stored online for more than 180 days. The bill is not perceived to be terribly controversial—after all, as one Senate aide points out, it is not intended to radically change the law, but simply to restore the balance that Congress originally intended when it passed ECPA in 1986.

WASHINGTON — The House passed a measure Wednesday that resolves a dispute over how to set student loan rates, sending it to President Obama, who has said he would sign the legislation “right away.” 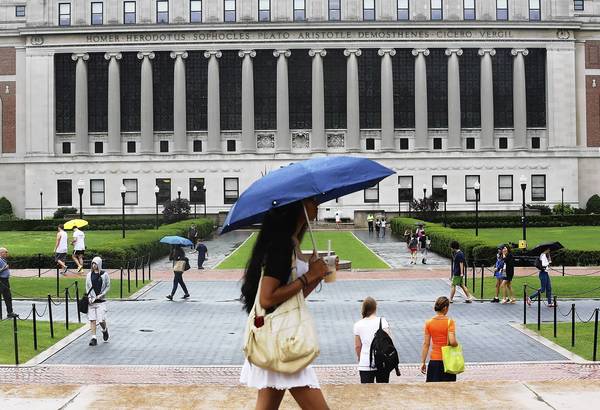 The compromise proposal, which passed 392 to 31, bases rates on the market and, at least temporarily, will allow some recipients of new federal student loans to pay lower rates than last year.

As the economy improves, however, rates will increase. But the bill also caps the rates and allows borrowers to lock in interest rates over the life of the loan.

“We wanted to get this out of the partisan, political squabble,” said Rep. John Kline (R-Minn.), chairman of the Committee on Education and the Workforce. “We wanted to let the market do this is in a way that’s fair to students and the taxpayer.”

Last year, interest rates were fixed at 3.4% for subsidized Stafford loans and 6.8% for unsubsidized ones. Borrowers of PLUS loans paid 7.9%.

Obama called for a market-based approach to interest rates. A disagreement between Democrats and Republicans in the Senate stalled passage of the measure by July 1, when the current fixed rates automatically doubled.

Student loan rates were based on the financial market between 2002 and 2007, when Congress set lower fixed rates. Those rates expired in 2012, and Congress passed a one-year extension.

Last week, the Senate modified a House proposal passed in May, lowering the rate and the cap for Stafford loans and allowing borrowers to lock in an interest rate for the life of the loan.

In the debate Wednesday, Republicans emphasized the similarities between the House GOP proposal and Obama’s approach, while Democrats praised the Senate compromise as a great improvement.

Rep. George Miller (D-Martinez), the ranking member of the Committee on Education and the Workforce, said, “This stands in stark contrast to the partisan bill passed in May.”

Don’t listen to the headlines—Rush Limbaugh’s talk radio supremacy ain’t over just yet. But it’s long been clear that his glory days are behind him. John Avlon on the final days of toxic right-wing talk.

Fox News presented an hour-long Rush Limbaugh infomercial on Greta Van Susteren’s show Tuesday night, allowing the embattled talk radio giant to offer up uncontested howlers like this: “I get more grief than the al Qaeda gets.” And this: “I don’t see any pushback [by the GOP] against anything Obama wants to do [by the GOP].” And finally this: “I can’t remember a time when it’s been more partisan, more divisive and getting worse—and being done on purpose.” Radio talk show host and conservative commentator Rush Limbaugh. (Bill Pugliano/Getty)
While Greta also found time to ask Rush’s opinion about the Zimmerman verdict (he pronounced it “uplifting”), no questions were asked about the big story that has Limbaugh in limbo: a Sunday night report by Dylan Byers at Politico that suggested Rush and his right-wing talk colleague Sean Hannity are on the verge of being dropped by Cumulus radio.

The report follows months of complaints by Cumulus CEO Lew Dickey about the impact of an advertiser boycott of Rush enacted after he called birth-control advocate Sandra Fluke a “slut” back in early 2012—a drought that has resulted in some $2.4 million in associated losses over the first quarter of 2013 alone as The Daily Beast reported in May. Combine those losses with the high cost of running Rush—his last contract, an eight-year inked in 2008, had a $400 million price tag—and an aging fan base of white men and at best you’ve got a recipe for renegotiations. At worst: ejection.

The president is done caring about congressional Republicans calling him a dictator. | AP Photo

President Barack Obama is planning to bypass congressional Republicans with a surge of executive actions and orders on issues like voting rights, health care, job creation, the economy, climate change and immigration.

Obama’s started to sell his pitch to congressional Democrats, meeting with caucus groups at the White House and going to the Hill on Wednesday morning to speak with House and Senate Democrats.

“I have to figure out what I can do outside of Congress through executive actions,” Obama told the Congressional Black Caucus earlier this month, according to Rep. Karen Bass (D-Calif.).

“He’s very ready to use his executive powers whenever possible,” said Rep. Judy Chu (D-Calif.) who heard Obama discuss the new approach at a meeting of the Congressional Asian Pacific Caucus to the White House last week.

With the clock running on Obama’s time in office — he’s even started marking the number of days left in public speeches — the president is done caring about congressional Republicans calling him a dictator. Or calling him at all.

Obama can’t ignore Republicans forever. There’s no way for the president to avoid negotiations to get continuing resolutions to avoid a government shutdown and raise the debt ceiling — and depending how things go, rebuff GOP efforts to defund Obamacare and possibly a compromise on immigration reform. Chief of staff Denis McDonough’s functioning as an almost one-man legislative affairs office can’t do it all.

And he’s used the executive authority tactic before, including last summer’s controversial move to cut deportations for younger illegal immigrants and the mental health focus he announced as part of his gun control agenda after the Newtown massacre.

But administration officials and advisers say what’s ahead will be more extensive and frequent than previous efforts, and the White House is on the hunt for anything that can move without congressional approval, including encouraging efforts like Attorney General Eric Holder’s lawsuits to find new avenues of enforcement in the wake of the Supreme Court’s decision on the Voting Rights Act last month.

He’s even started soliciting suggestions for where to move next. Bass and other CBC members asked him to change the Medicaid process in territories to base allocations on income level, to repeal the Bush minimum wage federal contractor policies and to address child welfare. The CAPAC members also offered suggestions like changing the federal government’s process of recognizing native Hawaiians.

Obama told them he was open to all of them, and said his staff is working on others in the model of the new emission standards he announced as part of his climate agenda last month.

Eventually, executive actions and orders will be unveiled as part of the economic agenda Obama began hinting at in his speeches last week, addressing things like mortgage refinancing and restructuring — which is about as extensive as the White House expects things to get, even as they talk of welcoming negotiations with Republicans over the debt ceiling. And get ready, he’s told people, for a whole lot more recess appointments if Republicans start blocking his nominees again.

Executive actions are a familiar move for second-term presidents, and one that Bill Clinton and George W. Bush came to know well: rules and regulations can have deep and wide impact, and they come without all the messiness of Capitol Hill.

Mike Lee To GOP On Obamacare: ‘If You Fund It, You’re For It’

Tea party Sen. Mike Lee (R-UT) put the GOP on notice Tuesday by characterizing a vote against shutting down the government by refusing to fund the Affordable Care Act as endorsing the law outright.

“Defund it, or own it. If you fund it, you’re for it,” Lee said on the Senate floor.

Lee, joined by Sens. Marco Rubio (R-FL) and Ted Cruz (R-TX), is spearheading an effort not to fund the government unless it excludes appropriations to implement Obamacare. The lawmakers are finding severe resistance within their own ranks, however.

One of those Republicans who disagrees with Lee’s strategy, Sen. Tom Coburn (R-OK), explained on the Senate floor that defunding Obamacare would require a highly-unlikely 67 votes.

“I’d love to defund Obamacare, I’d like someone to show me a mechanism to do it,” he said.

American technology companies like Apple have been criticized for outsourcing manufacturing of their gadgets to China, rather than employing people to do the work in the United States. But one tech icon, Amazon, is seeking to call attention to the thousands of working-class jobs it’s creating in the United States.

On Monday, Amazon plans to announce it is creating more than 5,000 new full-time jobs in its United States warehouses to handle growing customer demand. The company currently employs more than 20,000 warehouse workers here, so the new positions represent a significant increase in its head count.

Amazon’s announcement is timed to coincide with a speech on middle-class jobs that President Obama is expected to give Tuesday at an Amazon warehouse in Chattanooga, Tenn.