Mike Janke used to be a Navy SEAL sniper. These days he’s taking on the government and corporate America. He’s the founder of Blackphone, an Android-based smartphone with privacy as its main selling point.

It’s not NSA-proof — in that everything is hackable if you try hard enough. But Janke says it’s taking on the entire mobile economy that lets law enforcement and companies in way too easily.

Take apps that look free but mine your data to earn big dollars. Facebook tries to get your contacts, Google Maps tries to get your geolocation, Pandora gets your music preferences. Blackphone has a default setting: no — unless you proactively choose yes.

Blackphone also rebels against smartphone norms. Say you want to spend Sunday afternoon lost in a coffee shop or a clothing store. You might think you’re off the grid, but your phone, using Wi-Fi, is talking to beacons “finding out where you’ve been, making offerings to you,” Janke says. “What Blackphone does, it’ll automatically stop that beacon activity, shut off any Wi-Fi pinging to protect you from those type of stalking things.”

In addition to hiding identity, Blackphone stores user data in a secure vault in Switzerland — kind of like those no-questions-asked Swiss bank accounts. It sounds like the digital equivalent of wearing sunglasses and a trench coat everywhere. So I ask the obvious follow-up question: Is it mostly for criminals? 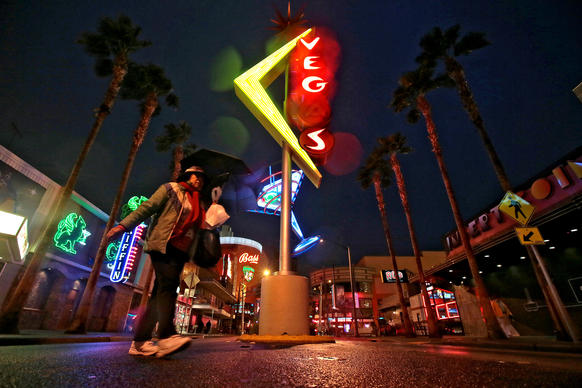 Around Sin City, giddy officials are heralding online shoe retailer Tony Hsieh as a visionary, the latest in a line of moneyed Las Vegas dreamers such as billionaire Howard Hughes and casino mogul Steve Wynn.

Mayor Carolyn Goodman says Hsieh is offering people a chance to open their dream businesses, and “that can’t be bad.” Former Mayor Oscar Goodman’s description of the city’s confidence in Hsieh harks back to the mayor’s days as a mob lawyer: Anyone who doubts Hsieh’s sincerity, he said at a public meeting, should have his legs broken.

Using $350 million of his own money, Hsieh has embarked on a development project that city officials hope will transform the blighted neighborhood just east of the Fremont Street casinos into a Silicon Valley in the desert.

Hsieh, the 40-year-old founder and chief executive of Zappos.com, envisions a bustling retail and technology hub spanning 20 square blocks where residents walk to restaurants, bars and gyms in a live-work community with the feel-good fraternity of a “Cheers” episode.

Hsieh calls downtown — a world away from the Strip and home to many of the city’s poorest residents — a “blank slate” that could come to resemble the bustling neighborhoods of clubs and galleries seen in Austin, Texas.

Inspired by the creative campuses at Google and Facebook, Hsieh is moving about 2,000 of his own employees to a new headquarters in Las Vegas’ former City Hall, an area that until now has been home to down-market casinos, neighborhood cocktail lounges and auto repair shops.

The Downtown Project, Hsieh’s development arm, has purchased dozens of properties for Hsieh’s vision of blurring the lines between work and play. The new, upscale Container Park, opened last year, features an art gallery, a beauty salon and boutiques selling fine wine and e-cigarettes. In front sits a curious piece of art: a towering statue of a praying mantis.

But while city officials have welcomed the development plan — a “watershed moment,” Oscar Goodman called it when the Zappos transfer was initially approved in 2010 — residents who have long embraced the down-to-earth vibe of East Fremont worry about the march of big-money development into one of Las Vegas’ last authentic neighborhoods.

Leading the resistance has been longtime downtown resident Lou Filardo, who has written letters, called City Council members and rallied neighbors to argue that redevelopment should not come at the expense of residents in the city’s poorest ZIP Code, where half the households rely on supplemental assistance and thewelfare rate is three times the state average.

Match your U.S. lawmaker with the corresponding charges on his or her fundraising expense account, and one can get a textured glimpse of exactly what it takes these days to charm donors.

For example, which congressman spent $91,000 in 2013 for a getaway at Dorado Beach Club, a luxury resort in Puerto Rico known for its championship golf courses and plantation-style residences?

That would be Rep. Steny Hoyer of Maryland, the No. 2 Democrat in the House, who has lamented the widening income gap that separates rich and poor and has been a forceful advocate for a minimum wage hike.

Which lawmaker appears to have an insatiable taste for red meat, having dropped $54,000 at BLT Steakhouse in Washington last year and another $5,000 at Bobby Van’s, a favorite haunt of D.C. lobbyists?

That’s House Majority Leader Eric Cantor, R-Va. If that wasn’t enough to put his political contributors in a giving mood, his PAC, Every Republican Is Crucial, spent $2,300 on “golf fees” and “golf items” through 2013, in addition to the $26,000 the organization expended on a single fundraiser at the luxury golf resort Creighton Farms in northern Virginia.

Since the GOP’s loss in the 2012 presidential election, Cantor has been at the forefront of the party’s efforts to rehabilitate its image, visiting a number of inner-city schools and touting the conservative approach to combating poverty.

Last one: Which senator spent about $8,000 on private car services, $15,000 on a reception at the Rubin Museum of Art in Manhattan and thousands more on caterers from Pasadena to Nantucket to London?

That would be Kirsten Gillibrand, D-N.Y., who focuses most of her legislative work on measures to improve the lives of women and families. Shelley Rubin, one of the owners of the Rubin Art Museum, then donated $5,000 right back to Gillibrand’s political action committee, Off the Sidelines, later the same year.

Al Jazeera America combed through the year-end Federal Election Commission filings of some of the most active PACs, looking for the more creative ways lawmakers choose to spend money to make money.

None of the disbursements detailed above were made directly by the lawmaker’s offices or official campaign apparatuses, but rather by their affiliated PACs. Cantor and Hoyer, along with dozens of other lawmakers, run leadership PACs — operations intended to leverage their star power in order to raise money on behalf of their colleagues.

Following in the footsteps of Republican lawmakers in Utah and Oklahoma, Texas Gov. Rick Perry and Attorney General (and Republican gubernatorial candidate) Greg Abbott have filed a notice of appeal against a Wednesday court ruling declaring the state’s ban on marriage equality unconstitutional.

As reported by the San Antonio Express-News, Perry and Abbott are named as defendants in the appeal asking for a preliminary injunction against the ruling.

Perry announced his intent to appeal immediately following the Wednesday ruling. “Texans spoke loud and clear by overwhelmingly voting to define marriage as a union between a man and a woman in our Constitution, and it is not the role of the federal government to overturn the will of our citizens,” he said in a statement. “The 10th Amendment guarantees Texas voters the freedom to make these decisions, and this is yet another attempt to achieve via the courts what couldn’t be achieved at the ballot box. We will continue to fight for the rights of Texans to self-determine the laws of our state.”

U.S. District Judge Orlando Garcia declared Texas’ ban on equal marriage and the state’s refusal to recognize the unions of gay couples married in other states to be unconstitutional. In his ruling, Garcia argued that both bans violate the equal protection and due process clauses of the 14th Amendment.

More to come as the story develops.

Biden Gives Democrats a Plan to Scratch the 6-Year Itch

Vice President Joe Biden can’t recall another time in the last 40 years when the majority of Americans agreed with his Democratic Party on every major issue.

Nonetheless, he said Democrats remain too timid, defensive and reactive about their positions heading into a challenging midterm election year. In a speech at the winter Democratic National Committee meeting Thursday, he essentially told state party leaders to stiffen their spines.

[READ: Democrats Can’t Run From Obamacare, Even if They Never Voted for It]

“What are we worried about?” Biden asked an assembling of state party chairs inside the Capital Hilton in downtown Washington, D.C. “If we run on what we believe, if we run on our value set, which happens to be totally consistent with where the American people think we should be on the substantive set of issues, we will win. We will win.”

Biden’s comments come as the Democratic Party is strategizing on how to navigate the politically perilous sixth year of Barack Obama’s presidency, a time when, historically, the party out of power makes electoral gains. The highest priority for Democrats is holding on to the Senate, where the party is fending off challenges in six states Obama lost twice.

In recent weeks, Democratic incumbents in red states like Sen. Mark Pryor in Arkansas and Sen. Mark Begich in Alaska have made explicit breaks with Obama and some of his policies – a demonstration of the president’s unpopularity in their states.

But Biden suggested that approach has its drawbacks in a year when the Democratic base needs extra incentive to turn out. He lamented that members of his party are overly worried about the avalanche of outside money facing them, rather than embracing a proactive posture to combat GOP attacks.

“Let’s not get too hung up here on the idea about the super PAC,” he said. “What we’re worried about is the Koch brothers and their friends bringing in millions and millions and millions of dollars. I’m still one of these guys who believes money can’t buy an election when you’re selling a bad set of goods.”

Biden advised Democratic candidates should always demand that their opponents articulate what they’re for, turning what often becomes a referendum on the president’s policies into a stark comparative choice.

“What they’re for, they don’t want to talk about,” he said. “We are too shy, we are not talking about it enough, in my opinion.”

The minimum wage, equal pay for women, background checks on gun owners, marriage equality and immigration reform are all issues backed by a majority of Americans, Biden contested. Though the Affordable Care Act’s popularity has taken a measurable hit in many key states, the vice president stressed it was still more popular than a repeal of the law.