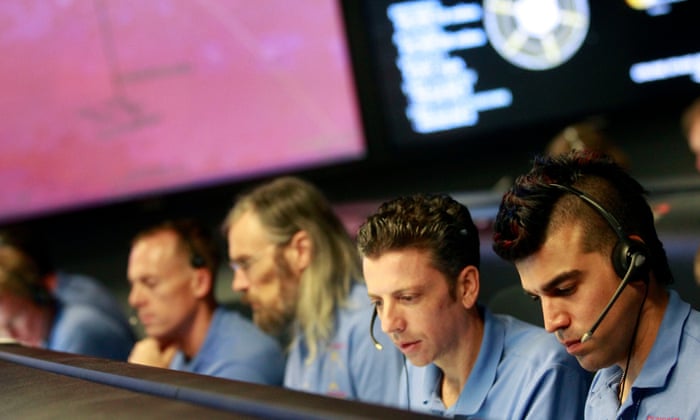 As space exploration goes, it looked like a good week for Nasa.

The revelation that scientists had discovered water on Mars – or more accurately uncovered evidence of certain chemicals in rocks that suggested recent liquid flows – piqued interest in the Red Planet ahead of this weekend’s launch of the sci-fi blockbuster The Martian.

If the announcement itself was cool enough, the messenger turned out to be pretty funky, too.

Lujendra Ojha, a postgraduate student at the Georgia Institute of Technology who made the discovery, is a Nepalese-born former heavy metal guitarist who is helping to change the public perception of a space agency geek.

Visitors to his personal website are greeted with an old photograph of a long-haired Ojha on stage and at the microphone with his death metal band Gorkha. Yet having chosen several years ago to pursue his studies in planetary science over a career in music, Ojha, 25, is still a rock star… as one of a generation of new “outsourced” young scientists helping to change the way the space agency presents its work in the social media era.

“You don’t have to have thick glasses and a skinny tie to be a Nasa scientist like back in the 1960s,” said Casey Dreier, director of advocacy at the Planetary Society. “You can be a guitarist; you can have all kinds of backgrounds to be included in space these days.”

For Nasa, which has increasingly embraced new media forms including Facebook and Twitter in recent years as it has sought to widen its appeal, colourful characters such as Ojha are a gift. Rocket engineer Bobak Ferdowski became an overnight sensation in 2012 as Nasa’s “Mohawk Guy”, his unorthodox haircut and bright clothes in mission control bringing extra welcome attention to the televised landing of the Mars Curiosity Rover.

Ojha’s position as one of a team of nine researchers funded, but not directly employed, by Nasa, also shines a spotlight on how the publicly funded federal agency pays for and conducts most of its science research through external contracts and arrangements.

While analysts, including Dreier, say there is nothing new in third-party partnerships – like the Georgia Tech-led study that brought the Mars water flow to prominence this week, and the work of astrophysicists at Johns Hopkins University that resulted in stunning close-up images of Pluto this summer from the New Horizons spacecraft – their importance to Nasa has never been greater.

“Nasa’s responsibility has increased as funding has diminished,” he said. “It’s a recurring joke around Nasa that they’re always having to pack 20lbs of ignition into a ten-pound bag.”

Budgetary wrangles have been a constant issue for Nasa since the years following the Apollo moon landings of the 1960s, when the space race accounted for almost 4.5% of the US federal budget. Funding has shrunk annually in real terms, and for 2016, President Obama has asked Congress to approve a budget of $18.5bn, half a percentage point of national spending and $4bn less than Americans spent on pet food last year.

Some space experts see Nasa’s recent public relations offensive as directly related to its need to secure future funding for the Mars programme, which includes the goal of manned exploration during the 2030s. Describing this week’s water-on-Mars announcement as the solving of a mystery, as Nasa did before its press conference, was “over-hyping”, according to John Logsden, a retired director of the Space Policy Institute and former member of Nasa’s advisory council.

“Preparing for humans-to-Mars is the rationale for Nasa’s human spaceflight programme, so in order to have the public support needed to sustain the programme, they fall into the long-established pattern of overselling,” he told the Washington Post. “The issue is whether the next president provides the startup funding for the next pieces of hardware that are required to do this. And at what point do we stop spending $3bn a year on the space station?”

Dreier, who coauthors his society’s monthly Planetary Report, agrees that finding the money for Mars, and the heavy-lift Space Launch System rockets and Orion capsules that will be needed to get there one day, will be an ongoing headache as Nasa’s administrator, former astronaut Charles Bolden, and senior leadership try to plot the course forward.

“Bolden has done a good job in turbulent political times,” he said. “It’s amazing what they do for the money they spend. Everything we’ve learned about Mars comes from 10% of the budget.

“In Congress, the biggest battles have been over earth science and commercial crew, endless back-and-forth over that. Then there’s SLS and Orion. It tells me that Nasa is being asked to do too much by the nation and isn’t given enough resources to be successful.

“It’s not like the 60s when the president shows up and says what he wants Nasa to do and doubles the budget two years in a row. We have to realise there’s no Kennedy moment coming up,” he added, referring to John F Kennedy’s game-changing 1962 speech at Rice University in Texas, during which he revealed the country’s commitment to a moon landing.

Essentially, according to Dr Mason Peck, Nasa’s former chief technologist and now a professor of mechanical and aerospace engineering at Cornell University, the eventual success of Nasa’s Mars endeavour relies on the pulling together of several key components. He said there needed to be the political will in Washington to see the job done combined with Nasa continuing to expand its scientific knowledge and develop new technologies with partners such as Ojha and his university team.

“You need experts to make science work, and that cannot reside within a few big Nasa centres around the country,” he said. “To be successful requires the will of the nation. There were some good people who put together Apollo, the same age then as today’s scientists are now. If Nasa was to stop doing the things that amaze us, then what’s the point?”