It’s tough at the top. As one psychological counsellor to the 1% says: ‘I am not necessarily comparing it to what people of color have to go through, but …’ 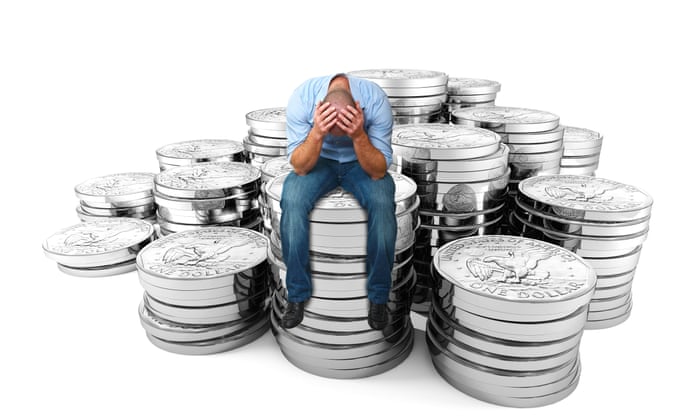 It is hard for the wealthy to discuss their troubles as others see them as overprivileged. But one therapist tells them: ‘Money is not the only thing that defines you. Your problems are legitimate.’ Photograph: Alamy

It’s a rainy Wednesday morning and Clay Cockrell is sitting in his office at Columbus Circle across the street from 1 Central Park West, which houses Trump International Hotel and Tower. In front of the tower is Central Park, where Cockrell holds his popular walk and talk therapy sessions.

Dressed in comfortable pants and a flannel shirt, Cockrell, a former Wall Street worker turned therapist, spends large parts of his days walking through Central Park or the Battery Park in downtown Manhattan near Wall Street, as a confidant and counsellor to some of the New York’s wealthiest.

“I shifted toward it naturally,” he said of his becoming an expert in wealth therapy. “We are trained to have empathy, no judgment and so many of the uber wealthy – the 1% of the 1% – they feel that their problems are really not problems. But they are. A lot of therapists do not give enough weight to their issues.”

And as they stroll through Manhattan, what issues are America’s 1% struggling with? There is guilt over being rich in the first place, he said. There is the feeling that they have to hide the fact that they are rich. And then there is the isolation – being in the 1%, it turns out, can be lonely. It seems F Scott Fitzgerald was right, the very rich “are different from you and me”. Especially in 2015.

From the Bible to the Lannisters of Game of Thrones, it’s easy to argue that the rich have always been vilified, scorned and envied. But their counsellors argue things have only gotten worse since the financial crisis and the debate over income inequality that has been spurred on by movements like Occupy Wall Street and the Fight for $15 fair wage campaign.

“The Occupy Wall Street movement was a good one and had some important things to say about income inequality, but it singled out the 1% and painted them globally as something negative. It’s an -ism,” said Jamie Traeger-Muney, a wealth psychologist and founder of the Wealth Legacy Group. “I am not necessarily comparing it to what people of color have to go through, but … it really is making value judgment about a particular group of people as a whole.”

The media, she said, is partly to blame for making the rich “feel like they need to hide or feel ashamed”.

‘It’s easy to scapegoat the rich’

Traeger-Muney, who moved to Israel six years ago, runs a global firm and specializes in working with inheritors, who often get a bad reputation in the press.

These types of protests can be very stressful for the rich. “It’s really isolating to have a lot of money. It can be scary – people’s reaction to you,” said Barbara Nusbaum, an expert in money psychology.

As a result, Cockrell points out, the rich tend to hang out with other rich Americans, not out of snobbery, but in order to be around those who understand them and their problems.

‘The rich have become more and more isolated’