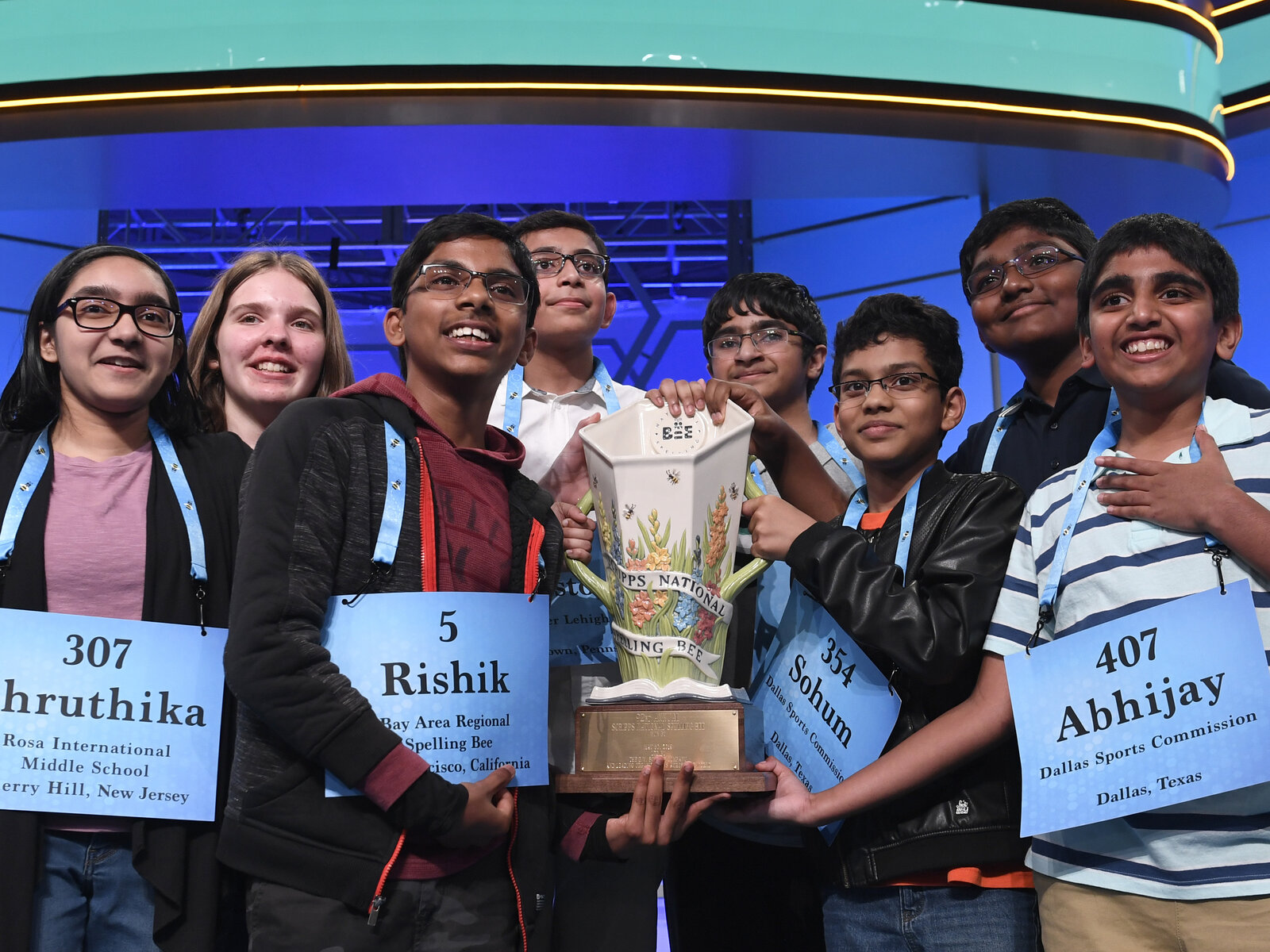 Eight co-champions are taking home the Scripps National Spelling Bee Cup after a record-breaking and exhausting night that ended in the 20th round, during which the pronouncer declared they had entered “uncharted territory” in the competition’s more than nine decades.

Rishik Gandhasri, 13, was the first declared winner after correctly spelling the word auslaut. The 7th grader, who is the sixth champion from California, gleefully raised both hands in the air in victory and relief.

Erin Howard, 14, did a celebratory dance upon hearing her final word: erysipelas. She ran into the arms of a fellow competitor sitting off-stage and began to cry after becoming the second champion from the state of Alabama.

Saketh Sundar, 13, who was attending the bee for the 4th time, asked for every pronunciation of the word bougainvillea then leaped into an unexpected hop when he got it right. He became the first ever champion from the state of Maryland.

Shruthika Padhy, 13, whose process throughout the final rounds of the competition was to ask the pronouncer several times to repeat the words in question, only asked to hear aiguillette a handful of times.

Sohum Sukhatankar, 13, had a habit of stuffing both hands into his black leather jacket. But after spelling pendeloque, he pulled one out for a quick and fierce fist pump.

Abhijay Kodali, 12, who last year took 3rd place, came in co-first place this year with the word palama — a victory that made him clutch at his heart when he returned to his seat.

Christopher Serrao, 13, the tallest of the group, had a habit of standing before the microphone as a cernuous plant might — nodding or drooping — as he scribbled the letters of the challenging word up the side of his arm.

Rohan Raja, 13, was the last of the group and he rocked back and forth as he awaited his final word: odylic. After requesting details about the origin and meaning of the word, the letters seemed to rush out of him and he was greeted by a round of high fives from the other winners.

The eight finalists out-spelled 557 other contestants ranging in age from 7 to 15 over the course of three days.

Pronouncer Jacques Bailly called the winners “the most phenomenal assemblage of spellers in the history of this storied competition.”

The state Assembly just passed a bill that could give Uber and Lyft drivers basic labor protections for the first time.

California just took a major step in rewriting the rules of the gig economy.

The state Assembly passed a bill Wednesday that would make it harder for companies to label workers as independent contractors instead of employees, a common practice that has allowed businesses to skirt state and federal labor laws. The bill will now go to the state Senate.

Hundreds of thousands of independent contractors in California, ranging from Uber and Amazon drivers to manicurists and exotic dancers, would likely become employees under the bill.

That small status change is huge. These workers would suddenly get labor protections and benefits that all employees get, such as unemployment insurance, health care subsidies, paid parental leave, overtime pay, workers’ compensation, and a guaranteed $12 minimum hourly wage. It also means companies are fuming about the added cost.

The California bill, known as AB5, expands a groundbreaking California Supreme Court decision last month known as Dynamex. The ruling and the bill instruct businesses to use the so-called “ABC test” to figure out whether a worker is an employee. To hire an independent contractor, businesses must prove that the worker (a) is free from the company’s control, (b) is doing work that isn’t central to the company’s business, and (c) has an independent business in that industry. If they don’t meet all three of those conditions, then they have to be classified as employees.

That is a much clearer — and stricter — standard of proof than the vague guidelines under federal law. And it’s one of the biggest challenges yet to the profit model of Uber, Instacart, Postmates, and other tech companies that rely on a small army of independent contractors. Uber would likely have to reclassify tens of thousands of drivers in California as employees — something Uber drivers have been fighting for in court, unsuccessfully, for years.

“Big businesses shouldn’t be able to pass their costs onto taxpayers while depriving workers of the labor law protections they are rightfully entitled to,” San Diego Assembly member Lorena González wrote on Twitter after members voted overwhelmingly in favor of the bill she helped write.

California businesses have been panicking over the possibility of the bill passing. The state’s Chamber of Commerce and dozens of industry groups have been lobbying for exemptions, and a long list of professions were excluded from the bill: doctors, dentists, lawyers, architects, insurance agents, accountants, engineers, financial advisers, real estate agents, and hairstylists who rent booths at salons.

Industry groups argue that these professionals are true independent contractors, with their own businesses and power to negotiate work contracts. Lawmakers agreed. After all, the purpose of the bill is to shrink income inequality by helping workers who employers are most likely to exploit. Uber drivers are the loudest in that group.

Netflix and Disney are threatening to pull film production in Georgia over the US state’s new abortion law – but neither company will comment on whether they will continue to make shows in Northern Ireland, where women face even more restrictions on their reproductive rights.

Georgia’s proposed law, which has prompted a growing boycott from the entertainment industry and leading actors, will ban women from seeking an abortion after six weeks. By comparison, Northern Ireland’s longstanding ban on abortion is absolute from the moment of conception, with anyone obtaining an abortion theoretically facing life imprisonment.

“There needs to be some consistency,” she added, suggesting that there is often a “blind spot” when it comes to the reality of life for women in Northern Ireland, who have to travel abroad for a termination.

“Companies like Disney making a public statement could put political pressure on in a way that an activist group like ourselves just can’t.”

Film and television producers were attracted to Georgia by the state’s tax breaks, but have now found themselves in the middle of a debate over abortion legislation. Most have chosen to stay quiet but Netflix’s chief content officer, Ted Sarandos, has been one of the few media executives willing to publicly speak out on the topic.

This week he would consider pulling his company out of the state – where it makes shows such as Stranger Things – if the proposed abortion law comes into effect, while also saying Netflix would join in legal efforts to fight the new legislation.

“Given the legislation has not yet been implemented, we’ll continue to film there, while also supporting partners and artists who choose not to,” he said in a statement. “Should it ever come into effect, we’d rethink our entire investment in Georgia.”

However, Netflix declined to comment on whether it would take a similar approach to Northern Ireland, where it has filmed the gameshow Flinch and is co-producing the drama Marcella with ITV.

This week Disney chief executive Bob Iger also said it would be “difficult” for his company to continue filming in Georgia if the law came into effect because “many people who work for us will not want to work there”.

Astronauts themselves are important sources of water in outer space. With the help of a special centrifuge, their urine is distilled, then processed to provide clean drinking water. (1:51)
Read more: https://www.smithsonianmag.com/videos/category/innovation/these-astronauts-drink-recycled-urine-to-sta/#XELZyFmGDcrtoRqC.99 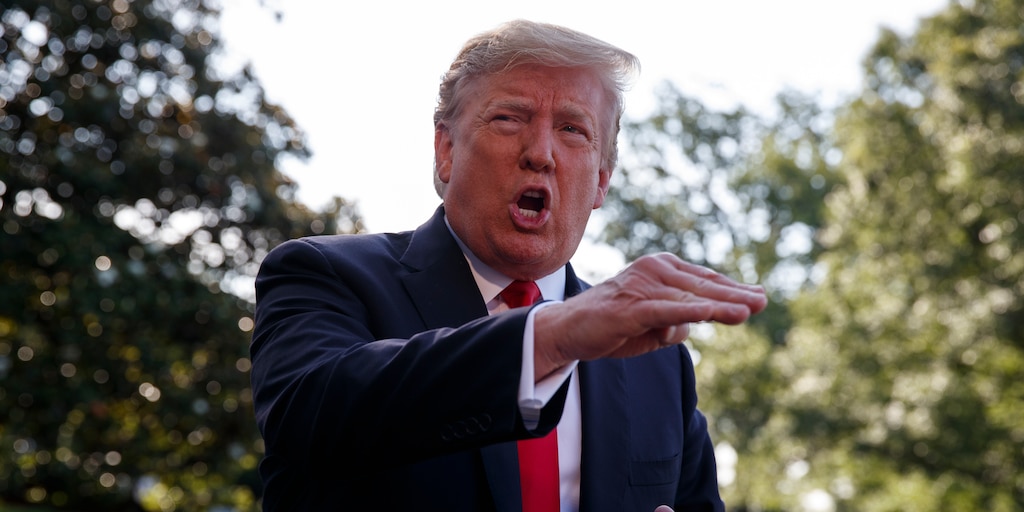 Asian and European stocks and US futures fell on Friday after the Trump administration announced tariffs on all Mexican exports to America in a bid to reduce illegal crossings at the southern border. China’s confirmation that it has planned out how to restrict America’s supply of critical rare-earth metals, and a decline in Chinese manufacturing in May, also weighed on markets.

“On June 10th, the United States will impose a 5% Tariff on all goods coming into our Country from Mexico, until such time as illegal migrants coming through Mexico, and into our Country, STOP,” the president tweeted. “The Tariff will gradually increase until the Illegal Immigration problem is remedied at which time the Tariffs will be removed.”

The tariffs will rise monthly until they reach 25% at the start of October and remain at that level “until Mexico substantially stops the illegal inflow of aliens coming through its territory,” the White House said in a statement. The duties have global implications as thousands of multinationals operate in Mexico including Ford, General Motors, Coca-Cola, IBM, John Deere, and Toyota, according to the BBC.

“Trump is going all out here,” said Jasper Lawler, head of research at London Capital Group. “The move to start a trade war on another front has shaken sentiment in an already fragile market.”

Shares in automakers that ship cars from Mexico to America were among the hardest hit as investors feared the tariffs would disrupt their Mexican operations and increase costs. Volkswagen fell 3%, Fiat Chrysler dropped 5%, and Mazda tumbled 7%. Banks BBVA and Santander, which have significant presences in Mexico, dropped around 4% and 2%.

“Coming at a time of a breakdown in talks with China, it’s another blow to bulls and we should consider further downside risks from escalation,” said Neil Wilson, chief market analyst for Markets.com. America starting “a fight with its neighbor and largest trading partner was not on the agenda.”

“The caprice of Trump has caught investors off guard and will weigh on investor sentiment,” he added.

“The death penalty has been an issue every New Hampshire legislator has grappled with over many years,” Democratic state Sen. Donna Soucy said in a statement. “It was a privilege today to join my colleagues in voting to repeal capital punishment in the Granite State.” Last year, a repeal bill passed both the state House and Senate, but the bill was vetoed by Sununu and lawmakers didn’t have enough votes for an override.

On Thursday, Sununu said on Twitter that he was “disappointed” in the Senate’s override vote.