The pharmaceutical industry paid out more than half a billion dollars over the last year alone. All sides expect the scale of settlements to grow fast as more cases go to trial.

Drug companies are accused of kick-starting the addiction crisis by aggressively marketing opioid pain medications over the past two decades. During the epidemic, roughly 218,000 Americans have died from overdoses tied to prescription pain pills, according to the Centers for Disease Control and Prevention.

A growing number of sources have told NPR they’re concerned that the effort to hold the pharmaceutical industry accountable could unravel into a legal fight between governments..

There’s no agreement in place for how payouts will be distributed. In recent days, feuding between local, state and federal agencies has begun to spill into the open.

In an Ohio courtroom this week, a federal judge suspended work on a plan to compensate 24,000 local governments for their opioid-related costs, after state attorneys general weighed in strongly against the proposal.

“If we get money, how are going to use it?” asked Joe Rice, an architect of the proposal, who leads a team of attorneys representing more than 1,200 local governments suing Big Pharma.

Their cases have been consolidated into a single trial set to begin in federal court in Ohio in October. “Let’s get a plan in place. Because it also has to fit together,” Rice added.

The federal judge overseeing the consolidated trial, Dan Polster, has repeatedly urged officials to come up with just such a roadmap for compensation that will hasten a “global” settlement with the drug industry.

But after Rice’s group came up with a concept that would involve every local government in the U.S. — creating a kind of super-sized class action lawsuit – state attorneys general cried foul.

“To certify a negotiation class so quickly and so early in the process, before everyone’s had a chance to determine what their best interest is, constitutes a new and novel procedure that could result in a grave miscarriage of justice,” cautioned Texas Attorney General Ken Paxton, in a June 24 letter to Judge Polster.

The letter was co-signed by 26 other state attorneys general. Judge Polster delayed action on the plan until August.

Meanwhile, the federal government has entered the money fray, seeking to garnish “a portion” of Oklahoma’s recent $270 million settlement with Purdue Pharmaceuticals.

The demand came in a June 12 letter from the Centers for Medicare and Medicaid Services, which argued that part of Purdue’s payout was meant to cover alleged Medicaid fraud, which harmed federal as well as state taxpayers.

“We are aware of the letter and are reviewing it,” wrote Alex Gerszewski, a spokesman for Oklahoma Attorney General Mike Hunter, in an email to NPR. “This will not affect state revenue,” he added.

Megan Rapinoe, the captain of the US Soccer Women’s National Team, has said she would not attend a White House celebration in the team’s honor if the US wins the 2019 World Cup, as it is currently favored to do. She has, however, accepted an invitation to visit the people’s House following the tournament.

Rapinoe, who scored both her team’s goals against France in a nail-biting World Cup victory Friday, accepted Rep. Alexandria Ocasio-Cortez’s (D-NY) invitation to tour the US House of Representatives following a dramatic week that saw the soccer star in President Trump’s crosshairs.

“It may not be the White House,” Ocasio-Cortez wrote on Twitter. “But we’d be happy to welcome [Megan Rapinoe] and the entire #USWNT for a tour of the House of Representatives anytime they’d like.” 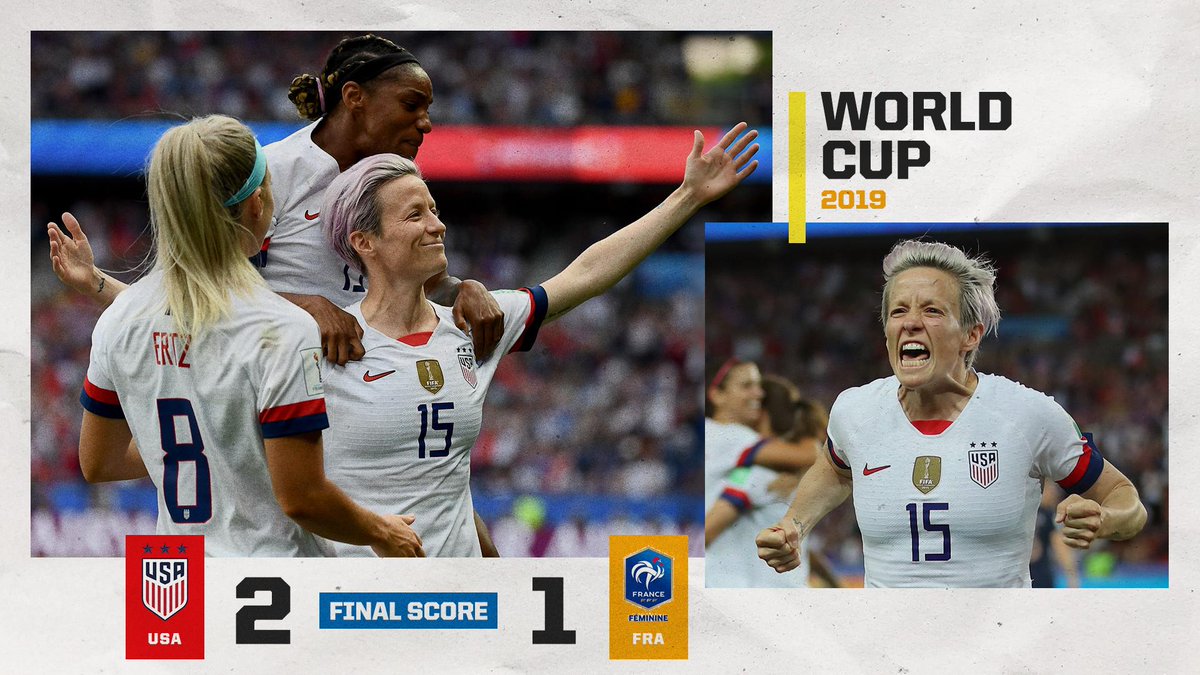 Police declared a civil disturbance in Portland, Oregon, on Saturday afternoon, after a day of duelling political protests culminated in brawls and standoffs between demonstrators and law enforcement.

By 3pm more than 400 leftwing marchers had blocked traffic in parts of downtown. Demonstrators occupied streets adjacent to Pioneer Courthouse Square, where police repeatedly warned them to disperse. Some were involved in altercations with officers in riot gear who deployed pepper spray and made three arrests. Others clashed intermittently with rightwing protesters.

The leftwing march evolved from an early afternoon rally in a downtown park organized as a counter-protest to two rightwing events. The rally organized by local group PopMob began as a vegan milkshake-themed rally and dance party, in response to rallies announced by the Proud Boys and by a group led by Haley Adams, a local rightwing figure. Adams’ event attracted around 25 people.

Milkshakes, recently used around the world as a symbolic weapon against prominent figures on the far right, became a theme of the day. Portland police claimed without offering evidence that some milkshake cups had been filled with quick-drying cement.

Last week, Reddit quarantined “r/The_Donald,” a pro-Trump message board, after the company determined that the subgroup had encouraged and threatened violence. Likewise, Twitter is signaling that it will flag—but not remove—posts by government officials who violate its rules. As with YouTube’s demonetization (rather than deletion) of anti-gay videos, these are welcome, but insufficient measures.

Until recently, social media platforms could feign ignorance about the scope and impact of harmful content on their sites. Now bigotry and conspiracy theorizing, which could once be dismissed as the rants of outliers, have hijacked mainstream discourse—including on media produced by President Trump and his allies. As such posts have become some of the most popular, moneymaking content being viewed and shared, social media executives simply cannot excuse their indifference.

Growing up, your parents most likely diverted your attention away from invented tabloid cover stories at the supermarket checkout counter. They might have admonished you that such stories were fake—or, better yet, made up. Today, such tabloids may be financially imperiled, if not defunct, but their conspiracy-driven, largely fiction-first approach has become the dominant culture of social media.

This leads us to ask: Where would society be today if parents failed to draw the distinction between fact and fiction? And what if CEOs like Susan Wojcicki, Mark Zuckerberg, and Jack Dorsey behaved more like responsible parents than greedy shareholders?

Wojcicki says that she and her colleagues are trying to “understand” what’s on the platform instead of removing explicitly bigoted content and delineating between real news and fictional providers. Meanwhile, Google warned its employees against protesting YouTube’s policies in this weekend’s Pride Parade. This is similar to Twitter’s decision to “study”—instead of decisively assert—whether white supremacists are harmful to the platform. Apparently, that is not a clear-cut answer.

According to Pew Research, YouTube has become the most popular online platform among American adults. But the vicious tone that was once was relegated to comment sections is now rampant across the site.

Insatiable profit motives have led to the toleration of bigotry and the exploitation of users across major social media platforms. There is money in hate. In his testimony to Congress last week, former Facebook chief security officer Alex Stamos revealed what most social media platforms refuse to admit: Artificial intelligence cannot replace human judgment in resolving the online extremism epidemic. “These white supremacist groups have online hosts who are happy to host them,” Stamos said, adding that platforms like Gab publish racist content with impunity.

Now AOC is cheering her on.

On Tuesday, US women’s soccer star and team co-captain Megan Rapinoe was asked by a reporter whether she would celebrate a victory at the Oval Office should her team win the World Cup this year. Rapinoe responded: “I’m not going to the fucking White House.”

President Donald Trump unleashed a series of tweets on Wednesday chastising Rapinoe for disrespecting “our Country, the White House or our Flag” and inviting the team to the White House. “Megan should WIN first before she TALKS!” he tweeted.

The soccer star later doubled down on her remarks, though she apologized for cursing. “Considering how much time and effort and pride we take in the platform that we have, and using it for good, and for leaving the game in a better place and hopefully the world in a better place—I don’t think that I would want to go,” Rapinoe said at a press conference. “I would encourage my teammates to think hard about lending that platform, or having that co-opted by an administration that doesn’t feel the same way and fight for the same things we fight for.”

Rapinoe was also the first white or female athlete to take a knee during the national anthem in support of football player Colin Kaepernick’s protest of America’s systemic oppression of people of color. She is not singing the anthem during this year’s World Cup. And she has been outspoken on LGBTQ issues and social change.

But even if she wouldn’t visit Trump, that doesn’t mean Rapinoe is planning to steer clear of celebrating in high places. After she scored two goals to lead the national women’s soccer team to victory in the quarterfinals over France on Friday, a different DC celebrity extended an invitation for a visit.

“It may not be the White House,” tweeted Rep. Alexandria Ocasio-Cortez, but Rapinoe and the women’s national soccer team were welcome to tour the House of Representatives “anytime they’d like.”

`Ben Rhodes said early Sunday that President Trump was lying when he said the Obama administration repeatedly attempted to meet with North Korean leader Kim Jong Un only to be rebuffed.

Trump seems at best naive, and at worst fawning, in his attitude toward DPRK leader Kim Jong-un. He is being played. Even as Kim drives down to the DMZ, his nuclear facilities are cranking out more fissile material for nuclear weapons. Trump is not fooling anyone.

429 people are talking about this

Trump said earlier Sunday during a news conference with South Korean President Moon Jae-in that Obama “wanted to meet, and Chairman Kim would not meet him.”

“The Obama administration was begging for a meeting. They were begging for meetings constantly. And Chairman Kim would not meet with him,” Trump added.

The president made the comments before making history on Sunday by crossing into North Korea as part of a meeting with Kim in which he and the North Korean leader agreed to restart stalled nuclear talks.

At This Time Algebra

Zap Mama – My Own Zero

Why We Cry Why We Die – Sault