The historic meeting will take place in Havana, Cuba.

Growing numbers of ‘millennials’ who are unaffiliated or atheists are causing vast changes in the American religious landscape, report says 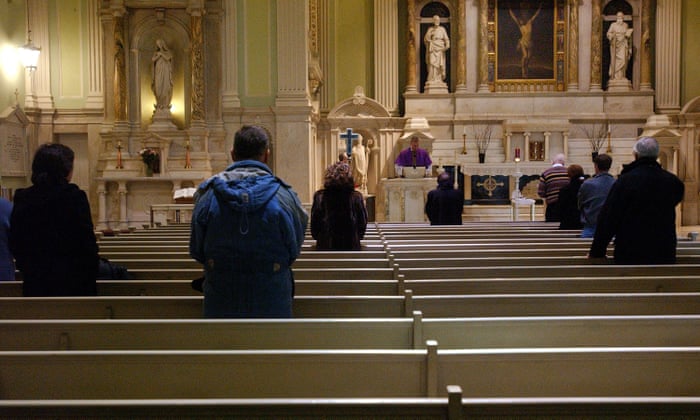 Declining levels of religious belief and practice among the generation of Americans born in the last two decades of the 20th century is shifting the US towards becoming a less devout nation, a major new survey has found.

The growing proportion of “millennials” – young adults now in their 20s and 30s – who do not belong to any organised faith is changing America’s religious landscape, says a report by the respected Pew Research Center, based on a survey of 35,000 people.

The religiously unaffiliated or “nones”, who include atheists and those who describe their religion as “nothing in particular”, have grown to 23% of the US population, compared to 16% at the time of the last comparable survey in 2007.

But three out of four Americans still have some religious faith, mainly Protestant denominations, Catholics, Jews, Mormons, Muslims, Buddhists and Hindus. And 89% of US adults say they believe in God – including a significant proportion of “nones” – making America more religiously inclined than other advanced industrial nations.

Overall, 55% of American adults say they pray daily, 53% say religion is very important in their lives and 50% attend a religious service at least once a month. Significantly, more women (64%) pray on a daily basis than men (46%).

(3 min) TV-PG It’s one of America’s favorite holidays, but what’s the real story behind the tricks and treats of Halloween?

Song of Lahore follows Sachal Studios musicians from their hometown in Pakistan to New York City as they rehearse and take the stage for a truly moving concert performance with the Jazz at Lincoln Center Orchestra, after receiving a personal invitation to perform from Wynton Marsailis.

When Facebook shelled out a stunning $19 billion for WhatsApp in February of last year, few here in the US had heard of the tiny Silicon Valley startup. The move surprised even the small coterie of journalists who so closely cover the Bay Area tech scene. This was because WhatsApp doesn’t do much PR—and because its eponymous smartphone app was predominantly used overseas.

But, oh, how it was used overseas. Facebook shelled out $19 billion because the app—a way of sending text messages over the Internet, without paying the typically high SMS fees that wireless carriers charge to send texts across their private networks—had reached a similarly enormous 450 million people across Europe and the developing world, including India and Africa. Sure, the app was simple. But it met a real need. And it could serve as a platform for building all sorts of other simple services in places where wireless bandwidth is limited but people are hungry for the sort of instant communication we take for granted here in the US. One simple messaging app could provide voice calling, video calling, instant payments, and more.

“It’s an amazingly powerful communication tool, distributed to populations that frankly have been reamed for years by SMS charges, and it has changed all that,” David Soloff, who used WhatsApp to help bootstrap his company, Premise, told us shortly after Facebook acquisition was approved last fall. “This is a profound thing.”

Now, a year after regulators approved the Facebook deal, WhatsApp is used by more than 900 million souls, which places it among the most popular apps on earth. Facebook is used by more than 1.5 billion, but few others even come close. And indeed, WhatsApp has added voice calling to its service, with more additions undoubtedly on the way. What may be most impressive, however, is that the company has done all of this with such a small staff. One of the most popular apps on the planet is run by a company that employs about 50 engineers.

And yet, the US media still has little to say about WhatsApp. The app is still mostly an overseas phenomenon—and the company still does little PR. In the one story they participated in—a profile in Forbes that appeared the day of the Facebook acquisition—company co-founder Jan Koum was unapologetic in saying he considers PR and press a drag on the company’s time. “Marketing and press kicks up dust,” said the Ukraine-born Koum, who founded the company alongside an old Yahoo colleague named Brian Acton. “It gets in your eye, and then you’re not focusing on the product.”

But in the wake of the company’s one-year anniversary with Facebook, Acton agreed to answer some questions, though only by email. The result is below, edited (slightly) for clarity.

Using examples from birdsong, the natural lilt of emphatic language and even a cooking pan lid, singer-songwriter and TED Fellow Meklit Hadero shows how the everyday soundscape, even silence, makes music. “The world is alive with musical expression,” she says. “We are already immersed.”

From sea to sea, America is jam-packed with amazing foods and local specialties.

From regional delicacies to to-die-for dishes, we found the one food you should eat in every US state.

We chose the most iconic and famous dishes, taking local recommendations into consideration, and picking items you simply can’t get anywhere else.

Whether you have a sweet tooth, a preference for spice, or love biting into a succulent piece of steak, we’ve got you covered.

View As: One Page Slides

Excerpted from “Where Everybody Looks Like Me: At the Crossroads of America’s Black Colleges and Culture”. This Bill Cosby interview was conducted prior to the rape and sexual assault charges against him; the author does discuss the allegations. The book, however, is about America’s historically black colleges, where Cosby had — and still has — a complicated and interesting legacy.

America’s once-favorite dad was on the line. It was an early weekday morning. “It’s the Bill Cosby machine,” the comedian announced. “Wake up, man! I wanna talk about these colleges.”

It’s tough to remember now, but there was a time when Bill Cosby seemed next in line to be carved into Mount Rushmore. He was so big, so pioneering, so damn likable that even black folks were willing, for the most part, to forgive what had become an embarrassing tic of sorts; a kind of media-induced Tourette’s in which Cosby, often unprovoked, would take the stage and rant endlessly on modern black life in America—witty if not misguided assaults on everything from irresponsible black teen mothers, to gun-toting gangsta youth, to hyperethnic, hard-to-pronounce black birth names.

More recently, though, what has become painfully apparent, too, is the extent to which Bill Cosby, in these artful soliloquies, has skirted his own personal failings, foibles, and perhaps even criminal proclivities; which, no less, include an ever-growing list of women alleging that, starting as far back as the early 1970s, Cosby drugged and raped them. While Cosby has denied or declined to address the various allegations, and even his own 2005 court deposition in which he admitted drugging a woman with Quaaludes for sex, his many accusers recount incidents of sexual assault and abuse that contradict everything we had imagined about him.

And yet in the perennially fragile world of HBCUs, where good press and large dollars remain in short supply, Bill Cosby’s fall from grace represents something close to an apocalypse. The black college doomsayer searching for a sign of imminent extinction can only relish the woes of Bill Cosby. However, few figures living or dead can boast the impact that Cosby has wielded across the black higher education landscape, whether it was the millions of dollars he gifted schools from his own pocket, or the millions he helped raise hosting HBCU fund-raisers, or the credibility he gave the institutions by simply sporting a black college sweatshirt through an airport.

Admittedly, there has been some suspicion about his agenda, an unsettling sense that maybe the man had become too rich, powerful, and detached to empathize and comment credibly on modern black life and its struggles. The fact that most had grown up in households that revered Bill Cosby as an entertainer, family man, and black citizen of the world started to become less relevant than his cultural shape-shifting; that the Jell-O pudding man, before our eyes, had morphed into the grumpy old sage and scold of black America. Like those kids on his ’90s TV show, Bill was suddenly saying the darndest things. “What part of Africa did this come from? We are not Africans. Those people are not Africans; they don’t know a thing about Africa. With names like Shaniqua, Taliqua, and Mohammed and all of that crap, and all of them are in jail.”

Yet as unsettling as Cosby’s transformation was to watch, Cosby’s views on black people, and especially young black people, have undeniably shaped popular black identity. Fat Albert, Claire Huxtable, and even Little Bill are like bells in the black subconscious that cannot be unrung; not any more than yanking down the six Chicago Bulls championship banners from the United Center would erase from a hoop fan’s memory Michael Jordan’s soaring dunks. Even amid the scandals, it’s unlikely that a generation of black folks can—or are even willing to—let go of their fond recollections of A Different World, that funny, socially conscious ’80s sitcom set in fictitious Hillman College, Cosby’s paean to black college life. The trials of Whitley Gilbert and Dwayne Wayne did more to attract black college kids to black campuses than those “A Mind Is a Terrible Thing to Waste” public service announcements ever could.

Mississippi’s state flag is the last in the US containing the Confederate battle flag. VICE News and Kal Penn travel to the Magnolia State for a lesson on race relations, barbecue, and the meaning of southern heritage for black and white residents of Mississippi.

In this extra scene, Kal Penn takes a tour of the former home of Jefferson Davis, the first and only president of the Confederate States of America.

Source: How Netflix Plans to Save the Mid-Level Film

You Move Me – Cassandra Wilson