THE “DOOMSDAY PLANE” weighs 800,000 pounds when fully loaded and can withstand the effects of a nuclear bomb or asteroid blast while remaining aloft for 12 hours without refueling. First deployed in 1974, the Boeing E-4B has been the preferred mode of long-range transportation for US secretaries of defense ever since. But when Ashton Carter’s staff discovered the behemoth would literally crush the runway in Sun Valley, Idaho, where he planned to attend the annual gathering of tech elite at the Allen & Co. conference, the SecDef nimbly switched to a sleek Gulfstream V. He jetted in with just a few aides, his wife (the conference is something of a family affair), an overnight bag weighing less than 10 pounds—and the message that the US military has a new spirit of agile entrepreneurialism.

The Spoils of a Single-Minded Focus on War

Between 1492 and 1914, Europeans conquered 84 percent of the globe, establishing colonies and spreading their influence across every inhabited continent. This was not inevitable. In fact, for decades, historians, social scientists, and biologists have wondered: Why and how did Europe rise to the top, even when societies in Asia and the Middle East were far more advanced?

So far, satisfactory answers have been elusive. But this question is of the utmost importance given that Europe’s power determined everything from who ran the slave trade to who grew rich or remained mired in poverty.

One might think the reasons for Europe’s dominance obvious: the Europeans were the first to industrialize, and they were immune to the diseases, such as smallpox, that devastated indigenous populations. But the latter reason alone cannot explain the conquest of the Americas, since many young Native American warriors survived the epidemics. And it fails to explain Europe’s colonization of India, since the Indians had similar immunity. Industrialization also falls short as an explanation: the Europeans had taken control of more than 35 percent of the planet even before they began to industrialize. Of course, the lead Europeans took in developing the technology of guns, armed ships, and fortifications was critical. But all the other major civilizations in Asia had the same gunpowder technology, and many of them also fought with guns.

So what did contribute to Europe’s success? Mostly, it derived from the incentives that political leaders faced in Europe—incentives that drove them not just to make war, but also to spend huge sums on it. Yes, the European monarchs built palaces, but even the huge Chateau at Versailles cost King Louis XIV less than two percent of his tax revenue. The rest went to fighting wars. He and the other kings in Europe had been raised since childhood to pursue glory on the battlefield, yet they bore none of the costs involved—not even the risk of losing their thrones after a defeat. Leaders elsewhere faced radically different incentives,, which kept many of them militarily weak. In China, for example, emperors were encouraged to keep taxes low and to attend to people’s livelihoods rather than to pursue the sort of military glory that obsessed European kings.

At the end of a long and storied career in uniform Dempsey was in a reflective mood, and the one reality he could not escape was just how much war and conflict there still was to be fought, and how many memorials to the fallen had yet to be erected.

This was his final trip as chairman of the Joint Chiefs of Staff and the last act of a Zelig-like military career that began over here more than 40 years earlier in a small German village, then proceeded to his personal involvement in every major war since, starting with the famed “left hook” in the first Iraq War and then command of the 1st Armored Division in the second. Forty long years of effort—and yet now at the end Dempsey is blunt in admitting that some things are actually worse than when he started his unusually long four-year tenure as a member of the Joint Chiefs.

Troubling times today for the Cold War-era weapon could mean certain dangers for the near future.

America needs to replace a rotting arsenal of nuclear weapons and counteract an increasingly boisterous Russia, the chairman of the House Armed Services Committee said Tuesday. For these reasons, it must consider the long-taboo prospect of building new nukes.

“Can we have a national conversation about building new nuclear weapons?” Rep. Mac Thornberry, R-Texas, said in remarks at the Atlantic Council in Washington, D.C. “That’s something we haven’t been able to even have a conversation about for a while, but I think we’re going to have to.”

Just last week, Russian President Vladimir Putin announced his plans to boost the former Soviet power’s nuclear arsenal with 40 new missiles. The plan follows a string of provocative comments from top Russian officials who consider a nuclear weapon the most effective method of countering what they consider NATO’s provocative actions in Eastern Europe.

“Russia obviously retains the right if needed to deploy its nuclear weapons anywhere on its national territory, including on the Crimean Peninsula,” Mikhail Ulyanov, head of the Russian Department for Non-Proliferation and Arms Control, said in early June. 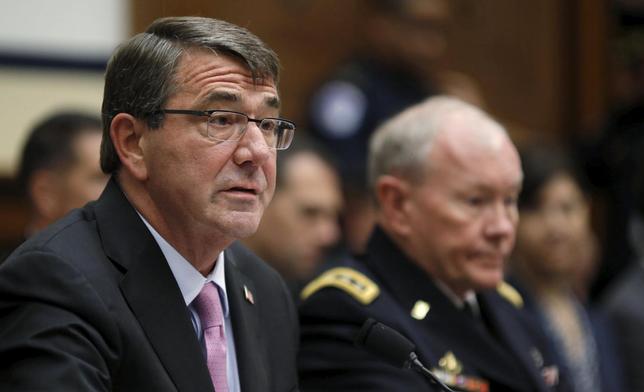 U.S. Defense Secretary Ash Carter will urge NATO allies to “dispose of the Cold War playbook” during a trip to Europe this week, as the alliance adapts to a new kind of threat from Russia in the east and Islamic State to the south, U.S. officials said.
Article continues:
http://www.reuters.com/article/2015/06/21/us-usa-europe-defense-idUSKBN0P10F920150621

For the companies lining up to build as many as 50,000 new vehicles to replace the Army’s Humvee — the ubiquitous symbol of America’s recent ground wars — the stakes are high.

For AM General, the contract award could determine if it remains the main provider of U.S. Army transport vehicles. Oshkosh Defense’ fortunes may very well depend on landing the contract. And if Lockheed Martin wins, it would mean gaining a rare foothold into a new military market.

But also on the line in the Joint Light Tactical Vehicle is the credibility of the Army, which has failed to successfully carry out number of ground vehicle programs in recent years due to a combination of delays, cost overruns and performance problems.

The JTLV program, set to cost as much as $40 billion over the coming decades, is a chance for the Army to prove that it’s fixed the kinks in its acquisition pipeline and can actually field a troop carrier as advertised, say government and industry experts.

The service’s recent record of multi-billion dollar management failures is widely known: A self-propelled howitzer, known as the Crusader, was terminated in 2002; the Future Combat System, intended to be a family of light tanks, was killed in 2009; and its replacement, the Ground Combat Vehicle, was shelved last year after it, too, foundered.

“The Army’s acquisition track record over the last decade has been atrocious,” said Loren Thompson, a defense consultant with Source Associates. “So if it can’t develop a next-generation Jeep, people will wonder what it can develop.”

The Army made the JLTV, a lightly-armed wheeled vehicle as opposed to a tracked one akin to a tank, a priority when it shuttered the GCV program – and Army Chief of Staff Gen. Ray Odierno recently reiterated the importance of the program

“When we look at vehicles, we look at a family and what do we need? And this one we absolutely need,” he said at a Defense Writers Group breakfast event May 28. “I feel really good about what we’ve done with the JLTV. I think the way we’ve developed the requirements, the way it’s moving forward — it’s a really important step for us. … It will be a central piece of the Army as we go forward.”

The production contract is expected to be announced this summer.

The timeline to begin equipping units is tight. The Army is set to choose by August between prototypes built by Humvee-maker AM General in Indiana, Oshkosh Defense in Wisconsin, and defense giant Lockheed Martin. And it plans to build 17,000 of the vehicles for the Army and Marines in three years, according to a recent analysis of the program by the Congressional Research Service, the research arm of Congress.

Nearly $460 million is being requested for the program in the Pentagon’s budget request now pending on Capitol Hill and $4.8 billion is budgeted over the next five years.

The trio of contractors eyeing the program, whose prototypes have undergone Army testing since 2013, have all launched ad campaigns aimed at key decision makers and enlisted former lawmakers, Capitol Hill staffers, and retired generals to help them win — and perhaps to apply some political muscle if they lose.

AM General, the manufacturer of the Humvee, has on retainer former Rep. Jim Saxton, a New Jersey Republican who served on the Armed Services Committee. Saxton’s former chief of staff, Elise Aronson, is also lobbying on tactical wheeled vehicles in her capacity as vice president of government affairs at McAndrews & Forbes, AM General’s parent company, according to lobby disclosure records.

Saxton said in a brief telephone interview that the work will pick up after the contract is awarded. “If they win the contract for JLTV, they’ll put me back to work,” he said.

Also working for AM General on light tactical wheeled vehicles, public records show, is a pair of former appropriations staffers, including Doug Gregory, who was a senior aide to the late Appropriations Committee chair Rep. C.W. “Bill” Young (R-Fla.), and Tom Quinn, former legislative director for Rep. Peter Visclosky of Indiana, who is currently the ranking Democrat on the Defense Appropriations Subcommittee.

AM General is an incumbent of sorts in the new competition and plans to build the JLTV in the same Indiana factory that it currently builds the Humvee, about 15 miles east of South Bend.