News reports said that they vowed to restart talks between the countries. 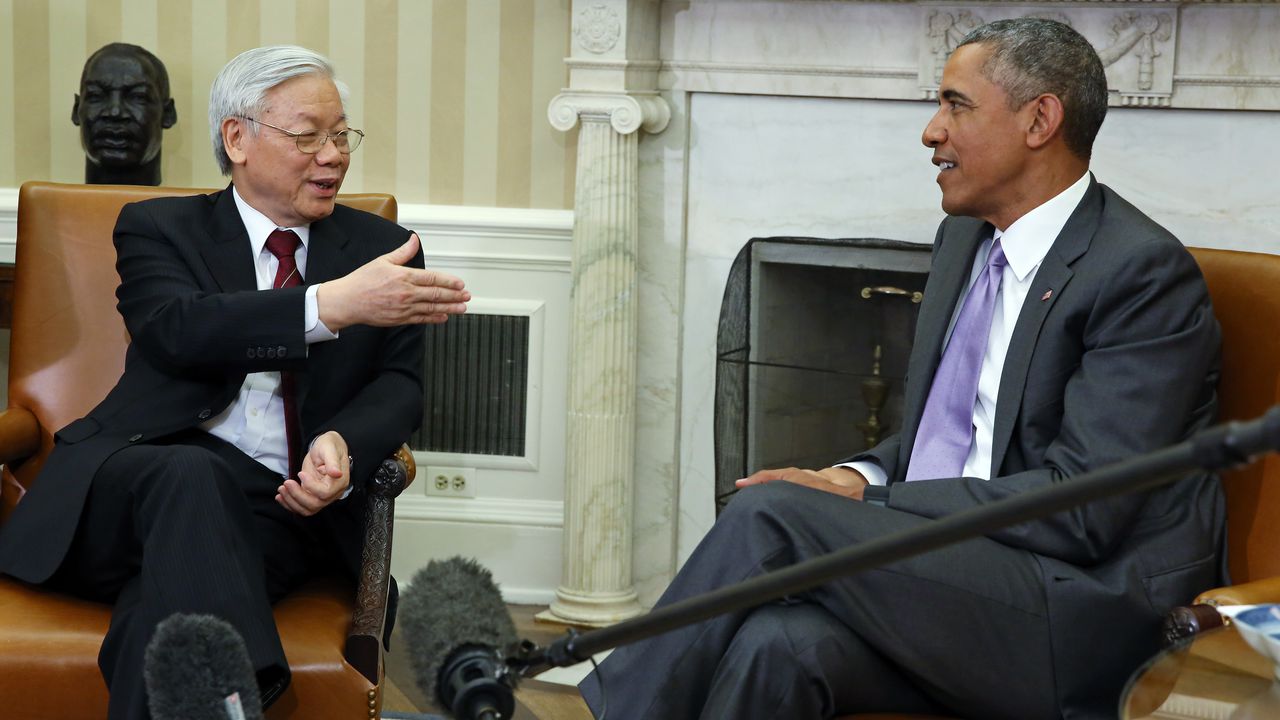 The Obama administration has finally released the full text of the Trans-Pacific Partnership, a controversial deal that would knit together the economies of a dozen Pacific Rim nations. Now Obama just needs to win one more vote in Congress for the US to accept the agreement.

But while the Obama administration says that the deal will boost the US economy and boost America’s influence in Asia, critics have portrayed it as a package of giveaways to corporate interests. They’re mobilizing the deny Obama the congressional majority vote he needs to get the deal over the finish line. The fight over the TPP has pushed Obama and Republican leaders into an unusual alliance against congressional Democrats who vehemently oppose the deal.

As soon as the agreement was released, interest groups began flooding my inbox with press releases praising or attacking the deal. But Simon Lester, a trade policy expert at the Cato Institute, predicts that it could take a month for a full picture of the deal’s implications to emerge. “If you want to get an overall sense, you have to compare every product and every service.” And there are hundreds of provisions spread over 30 chapters, so that’s going to take a long time.

The TPP is a lot more than just a trade deal

The TPP is usually described as a trade deal, and it certainly will have important provisions related to trade. Negotiators have been considering liberalizing trade in cars and trucks, rice, dairy products, textiles, and a lot more.

But the agreement is also a lot more than a trade deal. It has more than two dozen chapters that cover everything from tariffs to the handling of international investment disputes. The reason these deals have gotten so complex is that people realized that they were a good vehicle for creating binding international agreements.

House Republican leaders and the White House are trying to figure out how to rebound from a stunning Friday defeat on the House floor that has left President Obama’s trade agenda in limbo.

The dramatic loss capped a week of furious lobbying by President Obama and GOP leaders, who for once had found themselves on the same side when it came to fast-track trade authority.

They appeared to be on the verge of a major victory on fast-track — and indeed, the controversial measure allowing Obama to send trade deals to Congress for up-or-down votes was approved Friday in a separate 219-211 vote.

But because the House failed to approve a separate measure for workers displaced by trade deals known as Trade Adjustment Assistance (TAA), the entire package sunk.

The TAA bill failed in an overwhelming 126-302 vote after House Democrats decided opposing the workers assistance legislation was their best strategy for defeating fast-track, which is mostly opposed by the Democratic conference.

For some trade supporters, it felt as if defeat had been snatched from the jaws of victory, and Ways and Means Committee Chairman Paul Ryan (Wis.) and other GOP leaders appeared visibly frustrated by the stunning events.

This is the year that NBA tanking went off the rails. The Philadelphia 76ers, for starters, exemplified a whole new level of basketball seppuku with a team so willfully awful that the New York Times Magazine felt compelled to publish a feature story about their willful awfulness. The Sixers’ smarty-pants front office—Philadelphia’s general manager, Sam Hinkie, has a Stanford MBA, as the profiles of the team’s losing ways inevitably noted—believes that the best way to make a bad team good is to first make it horrific. By descending into “tank mode,” the Sixers hoped to lose enough games that they’d receive one of the valuable first picks in the upcoming NBA draft.

How to solve the problem? The best tanking solution would be relegation, as happens in European soccer leagues. Each year, the bottom three teams in the continent’s top divisions are kicked out of the league and relegated to a lower one. Regrettably, with NBA teams currently selling for $2 billion apiece, it’s unlikely we’ll get owners to agree that a few of them should be banished to the D-League each year to compete against the Sioux Falls Skyforce. (No one believes this will happen—otherwise we’d see a bidding war for last year’s champion, the Fort Wayne Mad Ants.)

A more likely solution would be for the NBA to flatten out the lottery odds. Right now the worst team has a 25 percent chance at the top pick while the 14th-worst team has a 0.5 percent chance. We could switch to a true lottery, in which all 14 non-playoff teams would get an equal 7.14 percent chance at the top pick. Or, more progressively, we could massage the system so that each team’s odds are closer but not equal. But this still wouldn’t entirely remove the incentive to tank. Besides, NBA owners recently rejected a plan along these lines.

Another draft scheme that’s gotten lots of attention is “the wheel”—a system in which the draft order would be set far in advance so that a team’s draft position would have zero to do with its on-court performance. This would eliminate any reason to tank, but it would also do nothing to help bad teams get better. The worst team in the league might end up picking dead last in the draft. The best team might pick first. Making the rich richer and the poor poorer would be an unacceptable outcome of any lottery reform. As horrible as the status quo is, some version of reverse-order drafting—and the increased parity it helps create—is still a worthy goal. So the problem seems intractable.

But fear not, NBA fans! A superior answer exists, and a friend of mine has invented it. It’s fair, it’s elegant, and it’s fun. My friend calls it the “You’re the Worst!” draft.

How would it work? On the day before the regular season began, the NBA would hold a “You’re the Worst!” draft. Selection order for the YTW draft would be determined like any standard reverse-order draft—the team that had the worst win-loss record in the previous season would pick first, the team that had the best record would pick last. But the teams wouldn’t be drafting players. They’d be choosing the rights to another team’s position in the next NBA draft.

So, for example, the Minnesota Timberwolves, who finished this season with the worst win-loss record, would have the first YTW pick in the fall when the 2015–16 season started. One day before opening day, all of the league’s general managers would gather together in a room. The T-Wolves would look around that room and decide which team they thought would finish worst in 2015–16. (They would not be allowed to choose themselves, tempting as that might be.)

He said Iran and the rest of the region should know that “if anybody messes with Israel, America will be there”.

But he rejected a call by Israeli PM Benjamin Netanyahu that any deal be conditional on Iran recognising Israel.

Mr Obama said such a condition would be “a fundamental misjudgement”.

The president, speaking in an interview with National Public Radio, said that it would be akin to saying the US would not seal a deal unless the Iranian regime completely transformed.

“If suddenly Iran transformed itself to Germany or Sweden or France, then there would be a different set of conversations about their nuclear infrastructure.”

On Monday, President Obama also sought to reassure Oman about the effects of a nuclear deal with Iran.

In a phone call, he told Sultan Qaboos that the US would work “with Oman and other regional partners to address Iran’s destabilising activities in the region”.

‘Right to be concerned’

Critics have accused President Obama of conceding too much ground to Iran and endangering Israel’s security.

But in an interview with the New York Times, Mr Obama firmly denied this.

“I would consider it a failure on my part, a fundamental failure of my presidency, if on my watch, or as a consequence of work that I had done, Israel was rendered more vulnerable,” he said.

Mr Obama said he recognised the concerns raised by Israeli Prime Minister Benjamin Netanyahu, a fierce critic of the deal along with the president’s Republican opponents in the US Congress.

He said Israelis “have every right to be concerned about Iran”, a country that had threatened “to destroy Israel, that has denied the Holocaust, that has expressed venomous anti-Semitic ideas”.

But he insisted that the preliminary agreement with Iran – a forerunner of a comprehensive deal, due to be agreed before 30 June – was a “once in a lifetime opportunity” to curb the spread of nuclear weapons in the Middle East.

In return, UN sanctions and separate measures imposed unilaterally by the US and EU will be gradually suspended as the global nuclear watchdog, the International Atomic Energy Agency (IAEA), confirms Iranian compliance.

Speaking on Sunday on CNN, Mr Netanyahu said: “Not a single centrifuge is destroyed. Not a single nuclear facility is shut down, including the underground facilities that they build illicitly. Thousands of centrifuges will keep spinning, enriching uranium. That’s a very bad deal.”

But Senator Lindsey Graham of South Carolina, a possible Republican presidential candidate, said it was “probably the best deal that Barack Obama could get with the Iranians” and that he would wait to see how the final agreement looked before passing judgement.

“I don’t mind giving the administration the time between now and June to put this deal together,” he told CBS.

Analysis: A deal which buys time