How we got here.

On November 15th, Minneapolis police officers shot 24-year-old Jamar Clark, who witnesses say was handcuffed at the time, in the head. Police initially said Clark was a suspect in an assault who was interfering with paramedics. They also maintained he was not handcuffed, though he was unarmed. The police union president later claimed that Clark was trying to grab an officer’s weapon. The involved officers were identified as Mike Ringgenberg and Dustin Schwarze. The pair joined the force a little over a year ago and are currently on administrative leave.

The mayor called for an independent federal investigation, and police say they have snippets of footage that they will not yet release to the public. But while the circumstances of Clark’s death are investigated, protests are escalating.

On September 15, the people of Andas, a small community in the mountains of central Peru, caught two men suspected of fatally shooting a local 57-year-old father of six. Since the nearest police station was two hours away, the mob took justice into their own hands: they stripped the alleged criminals naked, bound their hands and feet, drenched them in gasoline, and burned them alive. As Andas’ mayor later told the newspaper La República, “La muerte de ellos fue la solución”—Their death was the solution.

This was not an isolated incident. A new wave of vigilantism has been sweeping Peru since the late summer, starting in the cities and then spreading outward. There is even a Twitter movement, #ChapaTuChoro, a slang term that translates to “Catch Your Thief,” that has sprung up and encourages citizens to go one step beyond civilian arrests—to take justice into their own hands and punish suspected criminals through public humiliation and even mob lynchings. Documentation of the gruesome behavior is often uploaded to YouTube.

But Peruvian citizens feel that their brand of street justice is justified. “It’s not that we are barbarians,” Someya Rojas Leivas, a supporter of the movement, told me. “It’s that we are tired of being at the mercy of criminals, and the bloody authorities do nothing.” Around the time of the Andas incident, national support for the movement hovered at around 53 percent; by early October, it had soared to 72 percent. “Run, run, run,” singer Rony warns criminals in “Chapa Tu Choro,” a catchy new pop song. “The village is after you.”

By any measure, this is a distinctly twenty-first-century phenomenon—a genuinely viral reaction to crime in a country whose battered mineral-based economy and stagnant minimum wage have made locals, especially in cities, feel starkly less safe than they did a year ago. According to a survey released in mid-October, 90 percent of people living in Lima do not feel safe walking the city’s streets. Citizens are fed up with their unresponsive state. In that sense, the #Chapa phenomenon is as much a call for government action as a cry of helplessness.

And that’s exactly what the trend was designed for. It began earlier this year in Huancayo, one of Peru’s largest cities. Cecilia García Rodríguez, a journalist and businesswoman, started the Chapa movement when she became outraged after police arrested a man who had broken into her neighbor’s home with a knife, only to release him 30 minutes later. The community’s sense of frustration was so palpable that Rodríguez had no trouble corralling them to make and post signs around their neighborhood: “Crooks, if we catch you, we won’t call the police,” they read. “We are going to lynch you.”

Rodríguez’s efforts, however, and the Chapa movement in general, may be a front for more political activities—it is cleverly timed, given Peru’s upcoming general elections in April 2016, and candidates have already begun campaigning. Although Rodríguez has never sought political office before, she is now considering a run for Congress in the spring. She was later revealed to have been a vocal supporter of Peru’s controversial former right-wing president Alberto Fujimori, who was convicted in 2009 of embezzlement and human rights violations.

If Rodríguez does run, she would find herself in good company—Fujimori’s daughter Keiko Fujimori is running for president again, after having lost to the current left-wing president Ollanta Humala in 2011. Keiko’s brother Kenji Fujimori, a sitting congressman, tweeted that the Chapa movement points to “the ineffectiveness of the government to provide security to the population.” Not coincidentally, Rodríguez’s movement feels largely derived from Fujimorism: it relies on right-wing populism, brutal pragmatism, and the attitude that Humala’s government doesn’t know what it’s doing. Leftist politicians have either denounced the movement or kept mum—they’re on the losing side of the public opinion battle. 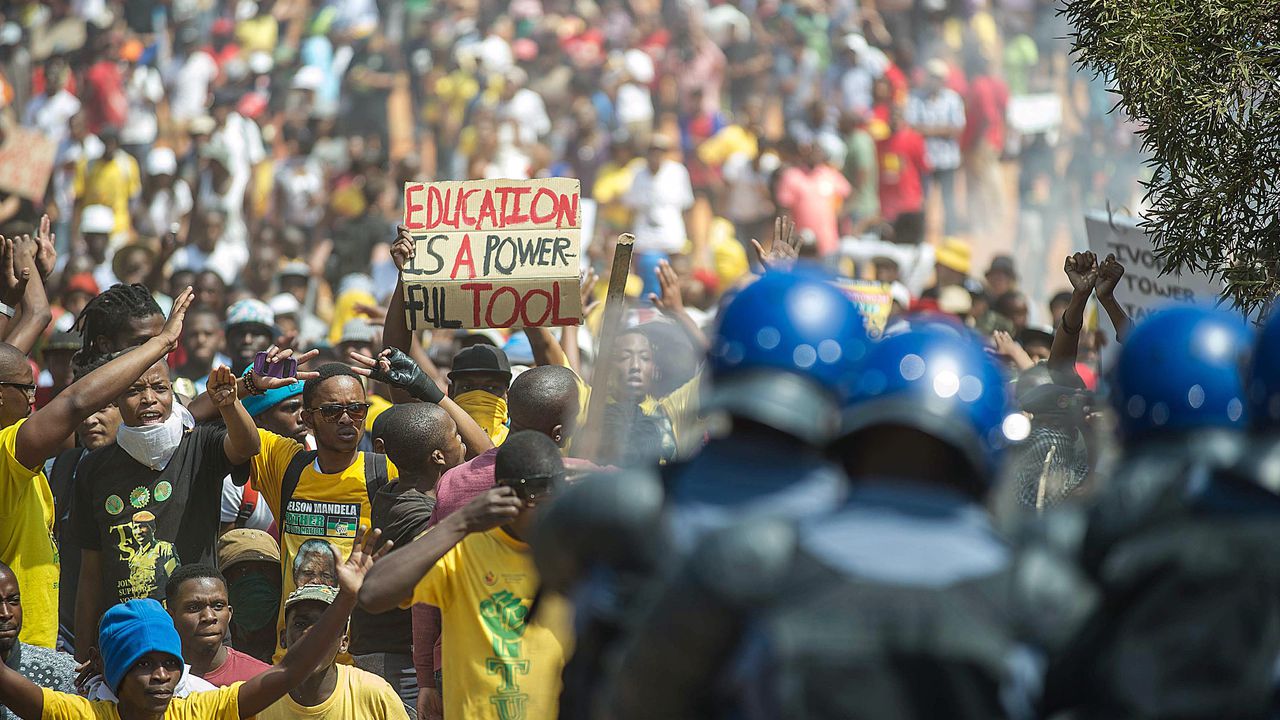 Student protests over tuition fees have rocked South Africa’s universities for about a week. The protests have been so large that a number of universities across the country were shut down. Friday’s protest in the capital, Pretoria, attracted 10,000 people — the largest student protest since the famous 1976 Soweto anti-apartheid demonstration, according to the Guardian.

The protests were frequently met with riot police, occasionally equipped with tear gas and stun grenades. This kind of conflict is “not seen since the apartheid era,” the Financial Times‘ Andrew England reports.

Here’s where the protests came from — and why they’ve become such a big deal.

The protests began at the elite University of the Witwatersrand (called Wits) in Johannesburg, South Africa’s biggest city. On October 14, Wits students organized a mass rally against what they saw as exorbitant increases in fees: students were being asked to pay 10.5 percent more in tuition and other fees, as well as 6 percent more in an up-front registration fee.

According to David Dickinson, a sociologist at Wits and a member of its council, the university felt it needed to raise fees to stay afloat financially. Dickinson, who voted against the fee increase on the council, blames South Africa’s government for providing insufficient financial support to schools and students. Without more government support, he writes, many poor and middle class black South Africans will not be able to afford higher education.

“The increasing reduction of state subsidies…is turning Wits and other universities into de facto private institutions,” Dickinson writes. “Elite not on the basis of intellectual ability, but on the basis of social class.”

This anger over perceived race and class discrimination fueled the initial round of anti-fees protest at Wits. But similar issues affected universities across the country, not just Wits, and so the protests spread like wildfire. Social media hashtags like #FeesMustFall and #NationalShutdown helped student protestors organize and share information across the country.

The government seemed to have no answer for this protest: tear gas did little to quell their growth. By the end of last week, the New York Times reports, the protests had “spread outside the campuses, as students have leveled their ire directly at the government.” Demonstrators “and police officers clashed outside the Parliament building in Cape Town, and students marched on Wednesday to the headquarters here of the African National Congress.”

Activists opposed to the permanent appointment of Baltimore’s interim police commissioner occupied City Hall on Wednesday night and told police they wouldn’t leave until the commissioner and mayor agreed to a list of their demands, including changes to police tactics and significant investment in education and social services.

Police officers have converged on Baltimore’s City Hall early Thursday morning, and least six protesters could be seen being led away to vans and vehicles.

At least 25 officers lined up outside City Hall and more police stood out back as protesters were led iff, several with hands behind their backs.  Protest sympathizers outside chanted: “It is our duty to fight for our freedom, we have nothing to lose but our shame!”

One of the organizers of protesters occupying Baltimore City Hall, Kwame Rose, left the building about 3:30 a.m. on Thursday before the police arrived. He was in tears, saying several police officers had arrived and that activists still remaining inside were now facing a threat of possible arrest. It is unclear if anyone was arrested.

On Wednesday night, members of the Baltimore Uprising coalition, which includes both high school and community activists, had begun shouting from the upper gallery of City Council chambers as a Council subcommittee prepared to vote for Kevin Davis as permanent commissioner. The full council will vote on the appointment Monday.

“All night, all day, we will fight for Freddie Gray!” the activists chanted amid calls to postpone the vote. “No justice, no peace!”

Freddie Gray, a black man, died in April from injuries received while in police custody. His death sparked unrest and rioting in the city. The first trial in the case against six Baltimore police officers charged in Grey’s arrest and death  is scheduled to be held Nov. 30.

Protesters gathered in Beirut’s Riad al-Solh Square on Saturday under the rallying cry “You stink!” — a reference to the city’s ongoing waste management crisis — a slogan which has since expanded to represent the population’s frustration with the government’s failure to provide basic services, including water and electricity.

Hundreds of protesters and security personnel were injured over the weekend as demonstrations over Beirut’s garbage crisis turned violent.