A new surveillance bill extends the powers of spies

Source: To MI5 with love | The Economist

In a three-month investigation, VICE News uses Freedom of Information laws, exclusive interviews, and prison reports to uncover the scandal of the 4,612 prisoners serving life sentences under abolished legislation — some for relatively minor crimes.

From 2005, judges in England and Wales started giving out a new kind of life sentence for offenses such as shoplifting, minor criminal damage, and affray (fighting in public).

Indeterminate Sentences for Public Protection (IPPs) were found to breach the European Convention on Human Rights, and the government scrapped the sentence in 2012. But nobody did anything about the prisoners already inside.

Three-quarters of them have completed their mandatory minimum sentence, but still have no release date, at a cost to the taxpayer of $180 million a year. Sixteen inmates have killed themselves since the sentence’s abolition.

Speaking to inmates, their families, lawyers, and a Parole Board veteran, VICE News exposes the UK’s forgotten prisoners.

The VICE News Capsule is a news roundup that looks beyond the headlines. Today: Nigeria’s most populous city has a housing problem, Indian veterans continue their hunger strike, prominent Iranians support the nuclear deal, and dog is man’s newest ally in the fight against cancer.

NIGERIA
Lagos Residents Build Homes in Garbage Dumps
A lack of affordable housing has pushed some people into the landfills.

The civil war in Syria has helped to create an unprecedented refugee crisis, with at least four million people having fled the country. Around 100,000 migrants and refugees have made it across the Mediterranean Sea to Europe in flimsy boats already in 2015, having paid thousands of dollars to gangs of people smugglers to facilitate the crossing.

Others have drowned when those boats have become overloaded and sunk. So far this year, over 1,700 people have died attempting the journey.

Earlier this month, the British warship HMS Bulwark was deployed to the Mediterranean to assist in rescuing migrants and refugees trying to cross into Europe by boat.

In this extra scene from “The UK’s Fight Against the Islamic State”, British Foreign Secretary Philip Hammond sheds light on the UK’s response to the migrant crisis and the methods being mooted by the EU to halt it.

Watch “A Year On From the Caliphate: The UK’s Fight Against the Islamic State” – http://bit.ly/1ANtt5S

One year on since the Islamic State (IS) announced a so-called caliphate across swathes of Iraq and Syria, a 60-nation anti-IS coalition meets for a second time in Paris on Tuesday, against the backdrop of recent territorial gains and new reports of atrocities by the group.

On the eve of the conference, VICE News spoke to UK Foreign Secretary Philip Hammond to discuss the country’s contribution to the coalition and the progress in the fight against IS.

Watch “The Battle for Iraq: Shia Militias vs. the Islamic State” – http://bit.ly/1Li6lNA

I’ve just come back from a few days in London where I had the chance to grill a few Americans – officials and non officials – on what they find tricky about explaining their country to my country.

It’s something that perpetually intrigues because the longer I live in America, the more different I think our two nations are and the more I feel Brits misunderstand the US, and vice versa.

Interestingly, the hardest things to reconcile seem to be America’s role in the world, what it should and should not be, and America’s relationship with guns.

One American businessman suggested he felt he was repeatedly tripped up by the continuing resentment of the invasion of Iraq which still sours British perceptions of America.

Historians will look back and suggest Europe’s post-Cold War love affair with the US was short and clearly ended with shock and awe over Baghdad.

What’s less clear to Brits is what they want from America today.

Offer them the alternative scenarios of US intervention in places like Syria and and Ukraine and no US intervention and they are divided on which they prefer (obviously the more pertinent choice is between smart and not-smart intervention).

On that ever thorny issue of guns, as we see yet another headline shooting, I have all but given up trying to explain America’s gun culture to Brits. So it was intriguing to hear how one US official is wrestling with it too.

He posed an interesting question, which I couldn’t really answer, so I’d love your thoughts.

Is there something Brits feel emotionally protective of, in the same way that Americans feel about the right to bear arms, whose application is not always socially beneficial in practice?

It’s a good question and would help me translate something so many Europeans just find incomprehensible.

It is always good to go back to London – and to see America again from the outside – even if it did rain a lot.

The scariest causes of death — war, murder, car accidents — are also some of the least common ways that we die. This fact is made abundantly clear in a graphic from Britain’s National Health Service, which displays the leading causes of death in the United Kingdom: 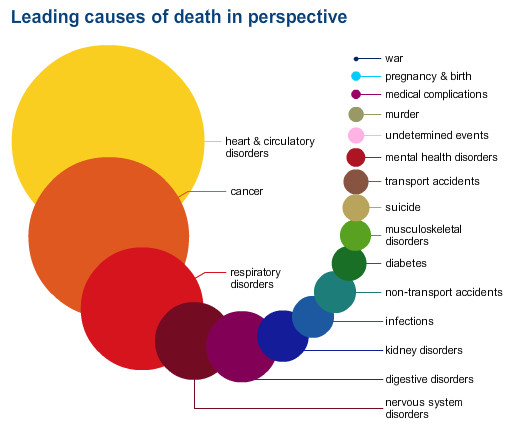 Much more mundane things, like circulatory and digestive disorders, are much more common causes of death murders or car accidents. While this data comes from the United Kingdom, the leading causes of death in the United States look pretty similar: heart disease, cancer, and chronic respiratory disease are the most common killers in America.

“Every day we are told of lethal new threats to our health and lives,” the NHS writes in an explanation of the graphic. “Food additives, knife crime, pollution, terrorism … It’s not that these threats are not potential killers, but in this blizzard of health warnings it’s easy to lose perspective and worry about small or insignificant risks while ignoring, or being unaware, of major threats.”

The NHS has also put together a set of “risk” factors that looks at some of the leading behavioral decisions that cause death, whether that’s smoking too much or consuming too few fruits and vegetables: 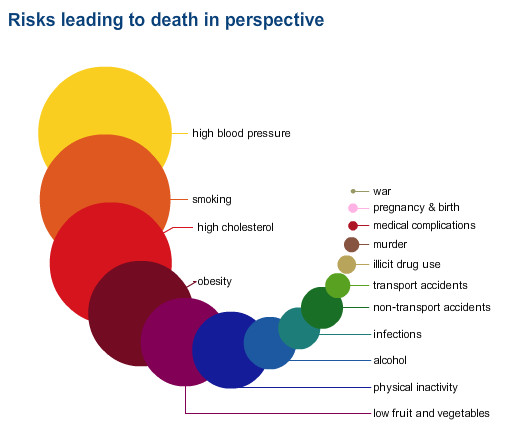 You can also use an interactive version of the Atlas of Risk, which lets you break down the risks and causes of death for different demographics. For example, that data shows that traffic accidents are a much higher cause of death for people between the ages of 1 and 19 than for other age groups. This is what that chart looks like: 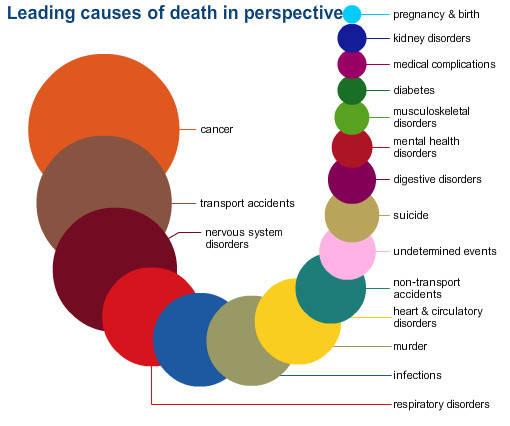 You can find the Atlas of Risk here. (And thanks to Peter Ubel for pointing it out on Twitter.)

The two leaders will have a working dinner at the White House on Thursday and meet in the Oval Office on Friday.

They are expected to discuss collaboration against internet-based cyber-attacks among other topics.

A report by GCHQ out this week is expected to highlight the threat to UK firms from such attacks.

Downing Street said the two leaders would discuss a range of global issues.

It added: “The prime minister is looking forward to the visit which will be an opportunity to discuss the global economic outlook, how we boost growth and increase free trade, and a number of national security issues such as Isil [Islamic State], counter-terrorism and Russia’s actions in Ukraine”.

White House press secretary Josh Earnest said in a statement: “Prime Minister Cameron’s visit highlights the breadth, depth and strength of our relationship with the United Kingdom, as well as the strong bonds of friendship between the American and British people.

“The United Kingdom is a uniquely close friend and steadfast ally, and the president looks forward to beginning the new year by working with Prime Minister Cameron on these issues and reaffirming the enduring special relationship between the United States and the United Kingdom.”

During his visit, Mr Cameron is expected to propose greater collaboration between the UK and US against cyber-attacks.

The report by GCHQ, the government’s communications security agency, this week, is entitled Common Cyber Attacks: Reducing the Impact. It is expected to warn that computer networks belonging to UK companies are coming under daily attacks by hackers, criminal gangs, commercial rivals and foreign intelligence services.

The report also suggests more than 80% of large UK companies experienced some form of security breach in 2014.

The intelligence service’s director Robert Hannigan wrote in a foreword: “In GCHQ, we continue to see real threats to the UK on a daily basis, and I’m afraid the scale and rate of these attacks shows little sign of abating.”

The two leaders last met during the G20 summit in November.

The UK and US leaders were this week united in their condemnation of the attacks on Paris that have left 17 people dead.

Mr Obama offered assistance to “bring these terrorists to justice”, while Mr Cameron said the UK stood with the French people in the fight against terror.

You Move Me – Cassandra Wilson