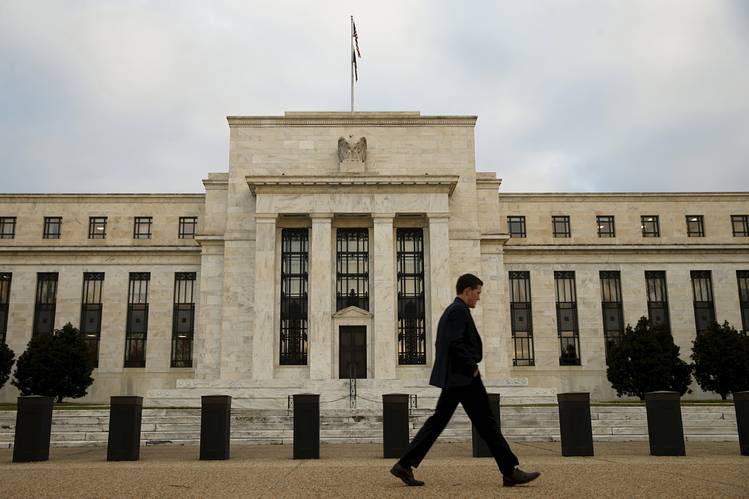 WASHINGTON—Regulators ordered five big U.S. banks to make significant revisions to their so-called living wills by Oct. 1 or face potential regulatory sanctions, a stern warning that will fuel criticism the firms are “too big to fail.”

J.P. Morgan Chase & Co., Wells Fargo & Co., Bank of America Corp., Bank of New York Mellon Corp., and State Street Corp. were told by the Federal Reserve and the Federal Deposit Insurance Corp. that the regulators felt their plans for a possible bankruptcy don’t meet the legal standard laid out in the 2010 Dodd-Frank law, which requires that firms have credible plans to go through bankruptcy at no cost to taxpayers

They said those firms had until October to present plans regulators find acceptable, or the agencies or regulators could impose higher capital requirements, restrictions on growth or activities, or other sanctions.

Bank stocks, however, rallied in recent trading, led by J.P. Morgan, which reported smaller-than-expected declines in earnings and revenue for the first quarter despite difficult trading conditions.

The regulators split in their assessments of Goldman Sachs Group Inc. and Morgan Stanley. The FDIC said that Goldman Sachs’s plan didn’t meet the legal standard, while the Fed didn’t give that negative assessment.

The two regulators took the opposite stance on Morgan Stanley. The Fed “identified a deficiency” in Morgan Stanley’s plan that it said didn’t meet the legal standard, but the FDIC didn’t go that far, the agencies said in a news release.

Pension funds allege that a cartel of big banks made it artificially expensive to hedge against interest-rate risk.

Wall Street’s biggest and best are facing new accusations of market-rigging in a multi-billion class action suit from investors in the $320 trillion market for interest rate swaps.

The suit, filed Wednesday, accuses 10 of Wall Street’s biggest banks and two trading platforms of conspiring to limit competition from non-banks in the lucrative market for dealing interest rate swaps, the world’s most commonly traded derivative.

The banks “have been able to extract billions of dollars in monopoly rents, year after year, from the class members in this case,” the lawsuit alleged.

The suit was brought by The Public School Teachers’ Pension and Retirement Fund of Chicago, which purchased interest rate swaps from multiple banks to help the fund hedge against interest rate risk on debt. The plaintiffs are represented by the law firm of Quinn, Emanuel, Urquhart, & Sullivan LLP, which has taken the lead in a string of antitrust suits against banks.

As a result of the banks’ collusion, the suit alleges, the Chicago teachers’ pension and retirement fund overpaid for those swaps.

The suit alleged that since at least 2007 the banks “have jointly threatened, boycotted, coerced, and otherwise eliminated any entity or practice that had the potential to bring exchange trading to buyside investors.”

The idea of the American family has changed dramatically over the past few decades: Young Americans are marrying later, finding marriage and parenthood to be less central concerns. But what does the structure of the modern American family mean for us, and how much is it costing us? To unpack the issue, we’ve enlisted author Ty Tashiro, New York Magazine’s Maureen O’Connor, and Mona Chalabi of FiveThirtyEight.

Introducing a new kind of talk show from VICE News. “The Business of Life” is a fresh perspective on the most important issues of our time, as told through the facts, figures, dollars, and cents that shape our world. Hosted by journalist Michael C. Moynihan, each episode brings together an eclectic panel of writers, thinkers, policy experts, and scholars to break down everything you need to make sense of the most complicated topics of our time.

All content is the sole property of VICE News. Materials presented are for informational purposes only and do not necessarily reflect the views or endorsement of Bank of America. Bank of America, VICE and/or their partners assume no liability for loss or damage resulting from anyone’s reliance on the information provided

Why he walked away from millions (part one) 4:03

Sam Polk started out on Wall Street fresh out of college. It was 2003, and the young trader was surprised to learn that one of his Bank of America colleagues had two Ferraris.

By the end of his first year, he had a $40,000 bonus. It was intoxicating, and he soon threw himself into the world of bond and credit default swaps. But even as he earned $1.5 million at the end of his second year at a hedge fund, Polk still felt jealous and worried that he wasn’t making enough.

“I was using money to fill this hole inside me,” he said. “It’s very hard to sort of maintain your own values amidst a system that values something different.”

And when the 2008 stock market crash happened – which Polk likened to “being on roller skates on a ship in the middle of a storm” – he didn’t lose money. He actually profited by shorting derivatives of risky companies.

But the crisis was a turning point. For one thing, watching industry bigwigs claim they couldn’t have anticipated the collapse helped crack away at the power Polk associated with them.

“I was like, ‘Oh so maybe these guys at the top aren’t masters of the universe,'” he said. “‘Maybe they’re just guys that happen to be at the top and what they are trying to do is hold on to their seats.'”

He also realized something else. Polk, who’d struggled with alcohol abuse while in college, had replaced his former addiction with a new one: wealth.

But leaving finance wasn’t so easy. He worried that 10 years down the line, he’d come to regret the decision – not to mention the others who thought the idea “crazy.”

According to the Consumer Financial Protection Bureau, these financial institutions draw the most complaints

If you put out a complaint box for customers of US banks and financial firms, you will get hundreds of thousands of complaints. That’s what the Consumer Financial Protection Bureau—which was set up by Elizabeth Warren before she became a US senator—has discovered. And the bank that has drawn the most complaints is Bank of America. Wells Fargo, JPMorgan Chase, and Citibank were other top targets of consumer wrath.

In June 2012, the CFPB launched a consumer help center where Americans can lodge complaints against banks and financial institutions they believe are ripping them off. The information in the center’s data base is public. So you can tell which Wall Street entities provoke the most gripes. Ranked by number of complaints, the top five most reviled institutions are Bank of America, Wells Fargo, Equifax, which is a credit-reporting agency, JPMorgan Chase, and Citibank. Debt collectors, mortgage servicers, and student loan servicing companies also fall within the top 20. As of this weekend, consumers had filed over 265,000 complaints. Bank of America earned 38,833 complaints, Wells Fargo drew 26,055, and JPMorgan Chase was the subject of 20,057. Check it out:

These numbers show that bigger is not necessarily better. The number of complaints largely corresponds with the size of the bank. JPMorgan Chase, Bank of America, Citigroup, and Wells Fargo are the largest four US banks by assets. All other banks on the list above are among the 20 largest.

The majority of complaints targeting Bank of America—over 27,500 of them—concern mortgage practices, including foreclosure processing. In 2012, Bank of America, Citi, Chase, Wells Fargo, and Ally Bank—the nation’s five largest mortgage servicers—entered into a $25 billion settlement with 49 states and the federal government over the banks’ use of faulty foreclosure documents. (Bank of America recently agreed to pay a fine of $16.6 million to the Treasury Department to settle allegations that it processed nearly $100,000 in transactions for drug traffickers between 2005 and 2009.) 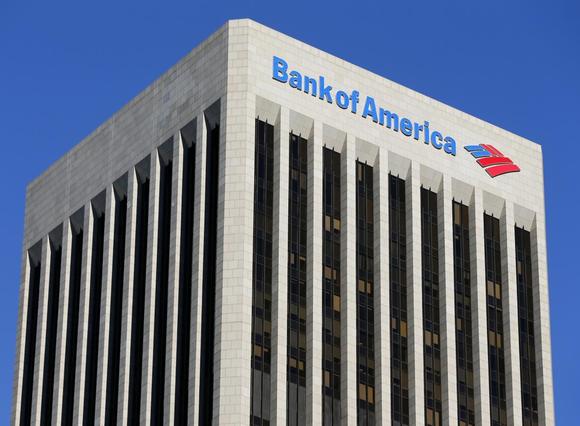 A Bank of America sign is shown on a building in downtown Los Angeles, California January 15, 2014.

(Reuters) – The U.S. Department of Justice and the Commodity Futures Trading Commission have both held investigations into whether Bank of America (BAC.N) engaged in improper trading by doing its own futures trades ahead of executing large orders for clients, according to a regulatory filing.

The June 2013 disclosure, which Reuters recently reviewed on a website run by the securities industry regulator FINRA, sheds light on the basis for a warning by the Federal Bureau of Investigation on January 8.

The warning, in the form of an intelligence bulletin to regulators and security officers at financial services firms, said that the FBI suspected swaps traders at an unnamed U.S. bank and an unnamed Canadian bank may have been involved in market manipulation and front running of orders from U.S. government-owned mortgage giants Fannie Mae (FNMA.OB) and Freddie Mac (FMCC.OB).

Reuters has since learned that Bank of America’s trading practices regarding Fannie and Freddie are the subject of probes, and that the investigations are ongoing.

The disclosure on the FINRA site doesn’t specifically accuse Bank of America of any wrongdoing.

It says: “We understand that the (U.S. Attorney’s Office) is investigating whether it was proper for the swaps desk to execute futures trades prior to the desk’s execution of block future trades on behalf of counterparties.”

The filing, which identifies the U.S. Attorney’s Office in Charlotte, North Carolina, where Bank of America is based, adds: “We also understand that the Commodity Futures Trading Commission is conducting a parallel investigation into the trading issue.”

The filing cites the bank as the source of the information.

The disclosure is in a FINRA “BrokerCheck” report on Eric Beckwith, a former managing director at Bank of America’s Merrill Lynch broker-dealer division in New York. BrokerCheck is an online system that allows investors to check the backgrounds of brokers for any regulatory issues or malpractice.

Representatives from the CFTC, and the U.S. Attorney’s office in Charlotte declined comment.

The filing said investigators are also looking into whether Beckwith gave accurate information to the CME Group’s Chicago Mercantile Exchange in connection with an investigation by the exchange into the trading.

Front running occurs when someone with advance knowledge of another market participant’s plan to make a sizable transaction puts an order in first, often profiting from a market move that can occur once the big trade has gone through. It is a concern for many regulators as it pushes up the cost of trades entered into by investors, including pension funds and governments.

In the bulletin, the FBI warned of “unsophisticated tradecraft” such as hand signals or special ring tones that traders were using to deliver information about impending orders in the interest-rate swaps market.

The document also said that the inspector general’s office of the Federal Housing Finance Agency, the regulator of Fannie Mae (FNMA.OB) and Freddie Mac (FMCC.OB), is looking into the matter.

Representatives for Fannie Mae and Freddie Mac declined to comment.

(Reporting by Karen Brettell in New York and Aruna Viswanatha in Washington, Editing by Karey Van Hall and Martin Howell)