A photo of the “man in the hat” presented by Belgian federal prosecutors shows a suspect wanted in connection with the March 22 attacks in Brussels during a press conference at the Federal Prosecutor office in Brussels, Belgium, April 7, 2016.

Belgian police on Friday arrested the two only attackers believed to have survived last month’s bombings in Brussels and the killings in Paris last November, in a major advance towards smashing the terror network that has left the Europe reeling for months. And while the arrests brought a palpable sense of relief to E.U. officials, it also raised worrying questions about how the men managed to evade a Europe-wide dragnet for so long.

Until their arrests in a Brussels suburb on Friday afternoon, the two men—Mohamed Abrini, 31, and 23-year-old Osama Krayem—were Europe’s most wanted fugitives, considered hardened operatives of ISIS, which has claimed responsibility for both the Brussels attacks on March 22, which killed 32 people, and the Paris attacks on November 13, which killed 130. Belgian officials said a total of five people were arrested.

While Belgian police finally had something to celebrate—the force has been heavily criticized for failing to prevent the Brussels attacks—there was no assurance that the network had been dismantled. The fact that the two men were among the few survivors of the attacks in Brussels and Paris—almost every other known attacker blew himself up—has led to speculation among police and E.U. officials about whether they intentionally remained alive, in order to plot further attacks on the continent.

Hundreds of people gathered at the historic square in the Belgian capital overnight. On Tuesday, double terror attacks on Brussels’ airport and subway claimed at least 31 lives. The evening vigil at the Place de la Bourse was a focus point of solidarity. Many attendees also expressed messages of resilience and hope.

A man chalks a message in front of the Brussels Stock Exchange showing support for the victims of the attack. — Christopher Furlong/Getty Images

As Belgium begins to piece together the unknowns from Tuesday morning’s triple bomb blasts in Brussels, cities around the world have been showing their support for the grieving nation.

The attacks, for which ISIS claimed responsibility, killed more than 30 and injured nearly 200.

In Brussels, people are continuing their daily lives, but not without pause for yesterday’s events. City squares have been filled with flowers, and roads and buildings are covered with chalk messages of strength and love.

“What we feared has happened, we were hit by blind attacks,” Prime Minister Charles Michel said at a midday news conference Tuesday. He added that there were many dead and many injured.

Citing an an unofficial source for the emergency services, Belgian broadcaster RTBF says that 14 people died in the attack at the Zaventem airport, and that 20 people died at the Maelbeek metro station.

French President Francois Hollande says, “terrorists struck Brussels, but it was Europe that was targeted — and all the world that is concerned.”

The number of dead and wounded could rise, as Belgian emergency agencies are focused on responding to those in need. Information is still emerging about this attack, and some reports may later prove inaccurate. Here’s what we know so far:

The Stoxx Europe 600 initially fell more than 1.3% in morning trade before paring losses to 0.5%

Travel and leisure stocks fell sharply after explosions hit Brussels’ international airport and a subway station near European Union institutions. Belgian officials shut down the entire public transport network in Brussels and immediately raised the terror alert across the country to its maximum level. Shares in Air France-KLM and Thomas Cook Group PLC fell about 4%. 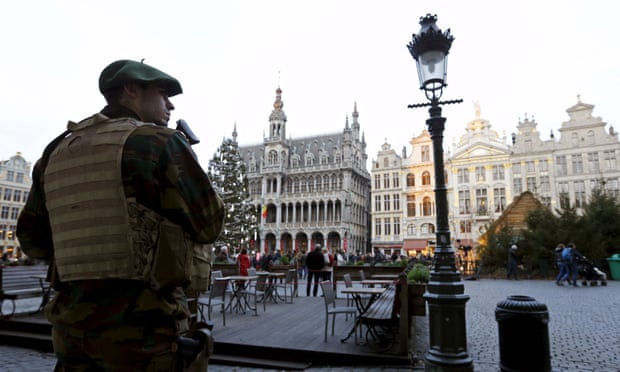 Brussels has cancelled its official celebrations, Paris called off an annual fireworks display on the Champs-Élysées and London increased the numbers of firearms officers on the streets as authorities across the world stepped up security measures for New Year’s Eve.

Belgian police detained six people during house searches in Brussels on Thursday in an investigation into an alleged plot to carry out an attack in the city. Earlier in the week two other people were arrested on suspicion of preparing attacks on “emblematic sites” in Brussels during the celebrations. Another man was questioned over links to last month’s Paris attacks.

Authorities said a firework display and festivities that attracted 100,000 people last year would not go ahead after revealing the alleged jihadi plot.

“Unfortunately we have been forced to cancel the fireworks and all that was planned for tomorrow [Thursday] evening,” the mayor, Yvan Mayeur, told Belgian broadcaster RTBF. “It’s better not to take any risks.”

In Paris, where 130 people were killed by extremists last month, the annual fireworks display on the Champs-Élysées has been called off and 11,000 police, soldiers and firefighters will patrol the French capital. In all, 60,000 police and troops will be deployed across the country.

However, France’s biggest public gathering since the atrocities will still go ahead on the Champs-Élysées.

Residents were asked to avoid crowded spaces as the city shut down, fearful of attack

BRUSSELS, Belgium — The streets in Brussels were deserted Saturday evening after authorities raised the city’s threat level to four —the maximum, indicating that the risk of an attack is “serious and imminent,” according to the country’s security committee.

Belgian Prime Minister Charles Michel said “relative precise information” led investigators to conclude there is a risk that several individuals are planning Paris-style attacks in the capital, “maybe even on several places at the same time.” He added, “potential targets are commercial centers, streets and public transportation, but also places where crowds of people are.”

Officials cited as one concern that Salah Abdeslam, a prime suspect in the Paris attacks who is still being sought, was last seen in Brussels and would have plans, along with others, to stage a similar attack on multiple locations in the city.

Security Minister Jan Jambon on Saturday evening told Flemish broadcaster VRT that “the threat is larger than only one figure,” referring to Abdeslam. “We’re assuming larger actions are underway,” he said. 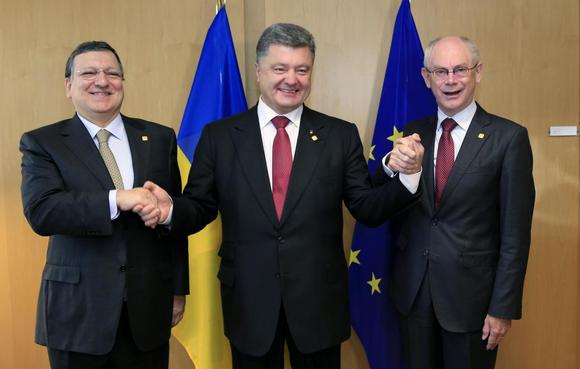 (Reuters) – The European Union signed an historic free-trade pact with Ukraine on Friday and warned it could impose more sanctions on Moscow unless pro-Russian rebels act to wind down the crisis in the east of the country by Monday.

Shortly after returning to Kiev from Brussels where he signed the pact, Poroshenko announced on his website that Ukraine had extended a ceasefire by government forces against pro-Russian separatist rebels by 72 hours until 10 p.m. on Monday.

Ukrainian President Petro Poroshenko came to Brussels to sign a far-reaching trade and political cooperation agreement with the EU that has been at the heart of months of deadly violence and upheaval in his country, drawing an immediate threat of “grave consequences” from Russia.

Georgia and Moldova signed similar deals, holding out the prospect of deep economic integration and unfettered access to the EU’s 500 million citizens, but alarming Moscow, which is concerned about losing influence over former Soviet republics.

The week-long ceasefire had been due to expire on Friday.

The extension was made, Poroshenko’s website said, in line with a Monday deadline set by EU leaders for the rebels to agree to ceasefire verification arrangements, return border checkpoints to Kiev authorities and free hostages including detained monitors of the OSCE rights and security watchdog.

“We expect progress in the next hours,” German Chancellor Angela Merkel said. “If we don’t see any steps forward on any of the points, then we are also prepared to take drastic measures.”

EU leaders said they were ready to meet again at any time to adopt significant sanctions on Russia. Diplomats said they could target new people and companies with asset freezes as early as next week. More than 60 names are already on the list.

Although it has drawn up a list of hard-hitting economic sanctions against Russia, the EU is still hesitating over deploying them because of fears among some member states of antagonizing their major energy supplier.

“We are talking about possible sanctions against Russia but we do not have to introduce sanctions for the sake of sanctions. We do have a need for a dialogue. I hope this dialogue will take place and we will have a real ceasefire,” Poroshenko told a news conference in Brussels.

Poroshenko has drawn up a 15-point peace plan to defuse the crisis in eastern Ukraine, where hundreds of people have been killed in clashes between security forces and pro-Russian rebels.

Ukraine, Georgia and Moldova have made clear that their ultimate goal is EU entry, but Brussels, under pressure from voters weary of further expansion, has made no promise it will allow them in.

Poroshenko and national security chiefs said that during the next 72 hours recruitment centers for Russian fighters across the border in Russia should be closed.

Ukrainian government forces would have the right to end the ceasefire ahead of time in any areas where ceasefire conditions were not being implemented, Poroshenko’s announcement said.