Who the Americans put in the White House makes a big difference to the world because US presidents have considerable power to shape foreign policy.

Think Lyndon Johnson and Vietnam; Richard Nixon and the opening to China; George Bushes Senior and Junior and their Iraq wars.

This election offers voters a real choice. Despite Donald Trump’s sometimes incoherent and seemingly improvisational approach to foreign policy, the two candidates do offer quite different visions. Hillary Clinton firmly believes the US role is to uphold a global security order from which it also benefits, the Pax Americana at the core of traditional US military and diplomatic thinking.

Donald Trump’s America First approach is more transactional. He frames alliances in business terms, vowing to get better value from them or pull back from historic commitments he says the US can no longer afford.

This is how their differences might play out in key international issues.

In no other area has Donald Trump departed more radically from decades of US foreign policy than his approach to traditional relationships. He has castigated Nato as outdated and obsolete and characterised its members as ungrateful allies who benefit from US largesse.

He says America can no longer afford to protect countries in Europe – and in Asia – without adequate compensation, suggesting he would withdraw American forces unless they pay up.

He’s also said Nato members like the Baltic states couldn’t count on the US to come to their military aid if attacked by Russia, unless they’d fulfilled their obligations.

Mr Trump is voicing longstanding criticisms. President Obama has also expressed frustration that most Nato members don’t meet their goal of spending at least 2% of GDP on defence.

But Mr Obama stands firmly by the military alliance. As does Mrs Clinton, who proclaims Nato one of the best investments America has ever made.

Continuing our POLITICO feature, where we dig into the latest polls and loop in other data streams to tell the story of the 2016 campaign. Here are five numbers that mattered this week.

Race and economic status have been the definitional rifts in presidential elections in the modern era. But 2016 promises to expose those cleavages to unseen degrees.

This week’s CNN/ORC poll lays out the divide in sharp relief: Donald Trump holds a commanding lead with white voters without a college degree, 56 percent to 32 percent. But among whites with a degree, Clinton leads by an 8-point margin, 48 percent to 40 percent.

While less-educated whites have trended heavily Republican in recent elections, the educational divide could be far greater this year. Four years ago, Mitt Romney won both groups of white voters by more than 20 points.

Overall, the poll showed Trump leading Clinton among white voters, 51 percent to 38 percent. That puts Clinton about even with Obama’s share of the white vote four years ago: 39 percent, according to exit polls, though other analyses suggest it could be a little greater.

Trump, on the other hand, is underperforming Romney, who won six-in-10 white voters. The CNN poll suggests it’s more-educated white voters who are most resistant to Trump.

Amid a national discussion of police violence and a series of high-profile shootings, the 2016 election has seen a rare focus on the fight for gun control 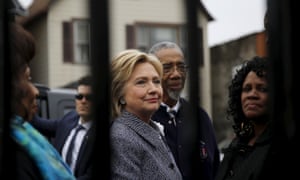 For years seen as a losing battle, the push for gun control has become a central conflict of the 2016 presidential election, and part of a broader struggle between competing visions of policing, justice and racism in America.

Donald Trump, the presumptive nominee of the Republican party, has pledged that if elected he will eliminate “gun-free zones” and make it easier to carry a concealed firearm in all 50 states. National Rifle Association members cheered him on Friday after their leaders endorsed his candidacy. “I will not let you down,” Trump told them.

His likely Democratic rival, Hillary Clinton, has promised the opposite: she will take on America’s gun lobby from her “very first day” in office. One of her advisers announced on Friday that she believed a landmark 2008 supreme court decision protecting gun rights had been “wrongly decided”. “We have just too many guns – on the streets, in our homes, in our neighborhoods,” she said last month.

Each candidate has made appeals to very specific demographics, implicitly linking the questions of gun rights and gun violence to race. In addressing the NRA’s annual meeting Friday, Trump spoke to an older, largely white crowd, and the NRA’s CEO, Wayne La Pierre, spoke to that crowd in exclusionary terms.

Elizabeth Warren talks Bernie, Hillary and her most favorite presidential candidate of all, Donald Trump.

There are enormous differences in how the leading presidential candidates want to tax America’s superrich.

On Friday, the Tax Policy Center, a nonpartisan think tank, published an analysisdetailing how the presidential candidates’ tax plans would affect the top 0.1 percent of income earners, or those making at least $3.7 million annually.

Here’s a chart put together by Vox’s Javier Zarracina based on TPC’s findings:

There are huge differences between Democrats and Republicans, and among Democrats

It’s worth highlighting just how big the divides are between the Democrats and the Republicans, as well as between the two Democratic candidates.

Sanders’s plan is, unsurprisingly, the most aggressive toward the superrich.

If his plan were approved, President Sanders would raise taxes for each household in the top 0.1 percent by an average of $3 million per household, according to the TPC.

By contrast, President Ted Cruz would cut taxes on the richest of the rich by an average of $2 million per tax filer. Donald Trump’s plan similarly calls for an average tax cut for the superrich by $1.3 million per family.

“These are tectonic shifts in tax policy,” TPC’s analysis says.

Hillary Clinton’s tax plan is the least dramatic of any of the four candidates. (TPC said Republican Gov. John Kasich had not released a detailed plan.)

Cybersecurity and digital rights have become a prominent part of the national conversation, in no small part because of the ongoing standoff between Apple and the FBI over a San Bernardino terrorist’s encrypted iPhone. So it is bit surprising that the remaining presidential candidates haven’t made much an effort to outline their positions.

Not that there would be much political benefit to it. The two candidates with the most clearly defined cybersecurity and privacy platforms—Ben Carson and Jeb Bush—have quit the race, and the two with the least to say on the subject—Donald Trump and Ted Cruz—are leading the GOP race.

But the fact the candidates don’t seem to care all that much doesn’t mean that you shouldn’t. Here’s where they stand so far on one of the most important issues of this race.

The extent to which Trump can be said to have a defined position on anything beyond America’s decline, and how negotiation will be its panacea, is limited. He has no official position paper on cybersecurity or privacy, and it’s not among his favored stump speech topics.

When Trump does address cybersecurity, it’s through a familiar lens: China. Trump accuses the nation and its citizens of “rampant cybercrime” against the US, and promises “stronger protections against Chinese hackers” as part of his position paper on the US-China trade relationship.

Otherwise, Trump’s positions have been scattered, misguided, or both. He has proposed, at varying times, “closing” parts of the Internet to combat ISIS and boycotting Apple  in response to its FBI encryption standoff (the irony is Trump—or someone on his team—tweets from an iOS device). In 2013, he suggested that execution may be an appropriate punishment for Edward Snowden. He has said he believes in a balance of privacy and security, but also that bulk metadata collection should be restored, to “err on the side of security.”

TL;DR: Trump’s cybersecurity and privacy considerations are much like his other viewpoints: Generally devoid of context, insight, clarity, or reason.

Supporters of presidential candidate Bernie Sanders are lashing out at Sen. Elizabeth Warren (D-Mass.) for staying neutral in the Democratic primary.

Some Sanders fans are particularly upset that Warren didn’t tilt the scales in the Vermont senator’s favor in her home state of Massachusetts, where Hillary Clinton pulled out an important win on Tuesday.

“Senator Warren, you’re all talk, no walk. Used to respect you but now I’ll take that respect and give it to Tulsi Gabbard, who actually deserves it,” said one commenter on Warren’s Facebook page, referring to the Hawaii lawmaker who recently stepped down from a position at the Democratic National Committee to back Sanders.

A glance at Warren’s social media shows that she is inundated by Sanders backers, who are offering a combination of pleas and recriminations over her choice not to endorse so far.

One recent post on her Facebook page about paid family leave had more than 1,000 comments, and nearly all were about her not endorsing Sanders.

“Coward,” said one critic with a Sanders logo for an avatar.

The online fervor over a potential Warren endorsement is so high that The New York Times had to publicly disavow a fake news article announcing Warren was backing Sanders.

Warren, who did not comment for this story, has been feeling pressure from all sides in the fractious Democratic battle.

She’s the only woman in the Senate who hasn’t endorsed Clinton, and her colleagues have pressed her to do so.

There’s no real doubt that Warren will eventually endorse the Democratic nominee for the White House.

Warren’s outsize presence in the Democratic Party virtually ensures her a plum speaking spot at the national convention, where she could play a role in uniting the party.

Leaders of liberal groups backing Sanders for president say they’re not bothered by her neutrality and credit her with helping to move Clinton to the left.

“I don’t think she’s been on the sidelines,” said Charles Chamberlain, executive director of Democracy for America, which has endorsed Sanders. “What she does is hugely helpful for Bernie. She continues to keep the campaign focused on the issues.”

Chamberlain also said Warren’s decision not to endorse Clinton yet is actually an implicit endorsement of Sanders.

“She’s the only female senator who has not made an endorsement of Hillary Clinton. That’s almost an endorsement right there,” he said. “It is saying, flat out, that I won’t just go along to get along.”