Sometimes it seems as though the fashion industry is more inclusive than ever before. In the past year, there’s been an increase in the number of mature models fronting ad campaigns and more people with disabilities on the runways of New York Fashion Week. Right now, eight black women are featured on September magazine covers.

But there are definitely major strides to be made.

We flipped through the September issue fashion editorials of seven major magazines — Vogue, Harper’s Bazaar, W, Elle, Marie Claire, InStyle and Cosmopolitan — to see if we could find any plus-size models.

According to the Centers for Disease Control and Prevention, the average waist size for women aged 20 and over is 37.5 inches. Depending on which retail store you consult, this translates to a slightly different pant size, but all of them qualify as plus-size. (At Gap, a 37.5 inch waist is between a size 18 and a size 20, at Coldwater Creek it translates to roughly a size 16. At Lane Bryant, it’s about a size 18.)

So, if the average woman is plus-size, why are there zero plus-size models in these fashion editorials?

Yeah, we’re not really sure either.

Alaskans are unusually likely to die in boating or airplane accidents. Accidental shootings kill more people in Tennessee than elsewhere, whereas syphilis is the most unique cause of death in Louisiana.

Related27 charts that explain how we die

This is the takeaway from a new Centers for Disease Control map published Thursday, which charts the most unique cause of death in all 50 states. To be clear: this is not the most common cause of death. The above causes of death represent, at most, 1.8 percent of all deaths in a given state. What they do show is what type of deaths are more likely to happen in one state than another. There were only, for example, 22 syphilis deaths in Louisiana — but that still makes it more prevalent there than anywhere else in the country.

Some of them make sense, like the high number of boat and air accidents in Alaska or the lung disease deaths in coal-mining states like West Virginia and Kentucky. Others are a bit more baffling — why is septicemia, a blood infection, turning up more in New Jersey, or “inflammatory diseases of the female pelvic organs” happening at higher rates in New York? This map does not have answers.

The CDC has one thought, however: it might just be that the data is really bad. Studies find that death certificates often have inaccuracies, and that could matter when dealing with relatively rare diseases:

Most death certificates are completed by community physicians who receive little or no formal training in this area. For example, a study found that nearly half of the death certificates certified by physicians in a suburban Florida county contained major errors, often reflecting confusion between the underlying cause of death and the terminal mechanism of death (6). It would not take many systematic miscodes involving an unusual cause of death for it to appear on this type of map.

That’s one caveat to keep in mind when looking at the types of deaths that appear to be most unique in your state.

As the US debates drug policy reforms and marijuana legalization, there’s one aspect of the war on drugs that remains perplexingly contradictory: some of the most dangerous drugs in the US are legal.

Don’t believe it? The available data from the Centers for Disease Control and Prevention (CDC) shows tobacco, alcohol, and opioid-based prescription painkillers were responsible for more direct deaths than any other drug in 2011. This chart compares those drug deaths with the best available data for cocaine, heroin, and marijuana deaths: 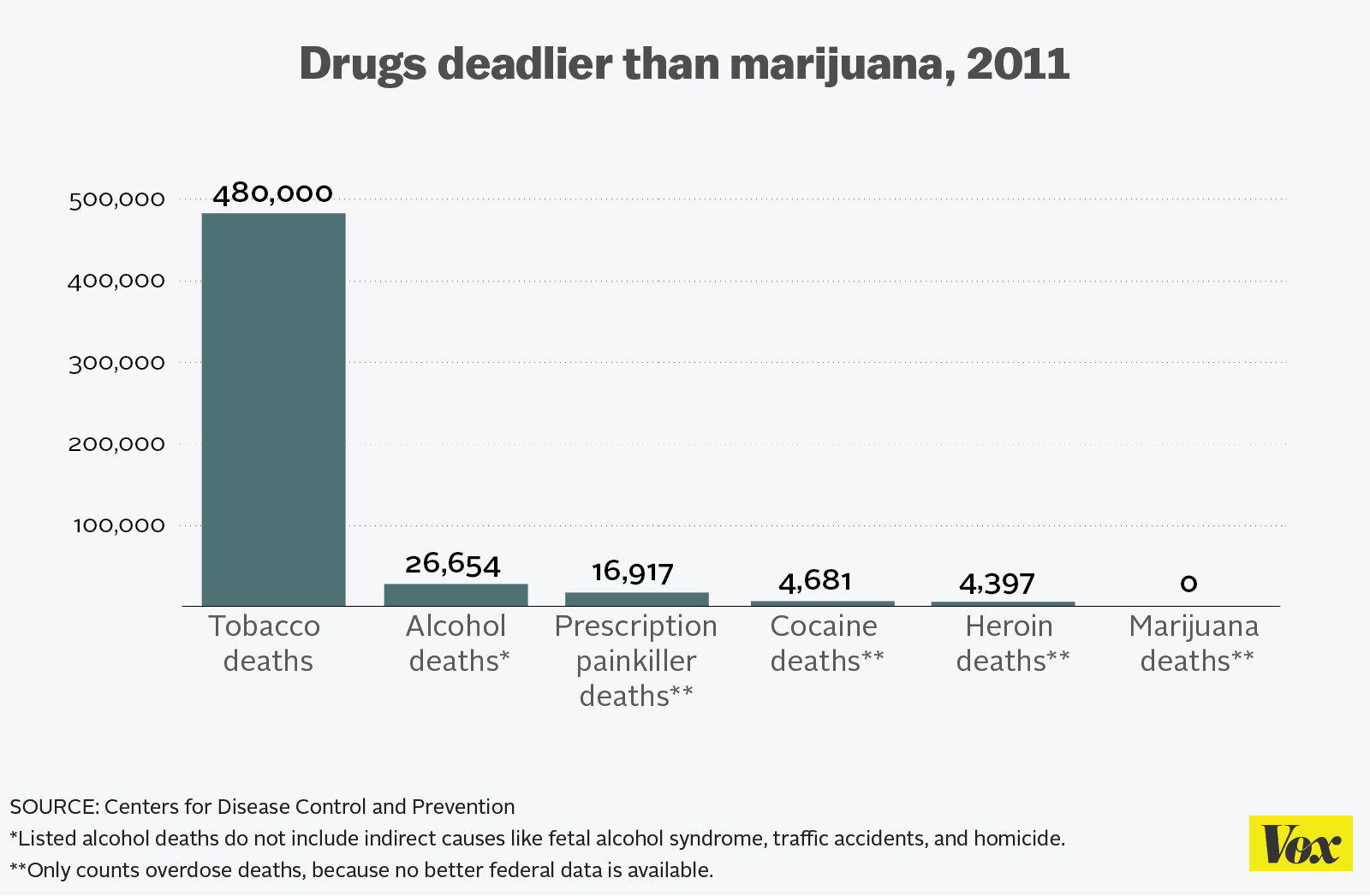 Now, this chart isn’t a perfect comparison across the board. One driver of tobacco and alcohol deaths is that both substances are legal and easily available. Other substances would likely be far deadlier if they were as available as tobacco and alcohol. (Heroin-linked deaths in particular have been trending up since 2010, topping 8,200 in 2013 and making heroin deadlier overall than cocaine.) And federal data excludes some deaths, particularly less direct illicit drug deaths, which is why the chart focuses on direct health complications for all drugs.

But the absolute numbers show legality doesn’t indicate safety. Here’s what makes tobacco, alcohol, and prescription painkillers so dangerous, and how policymakers can curb the problem. 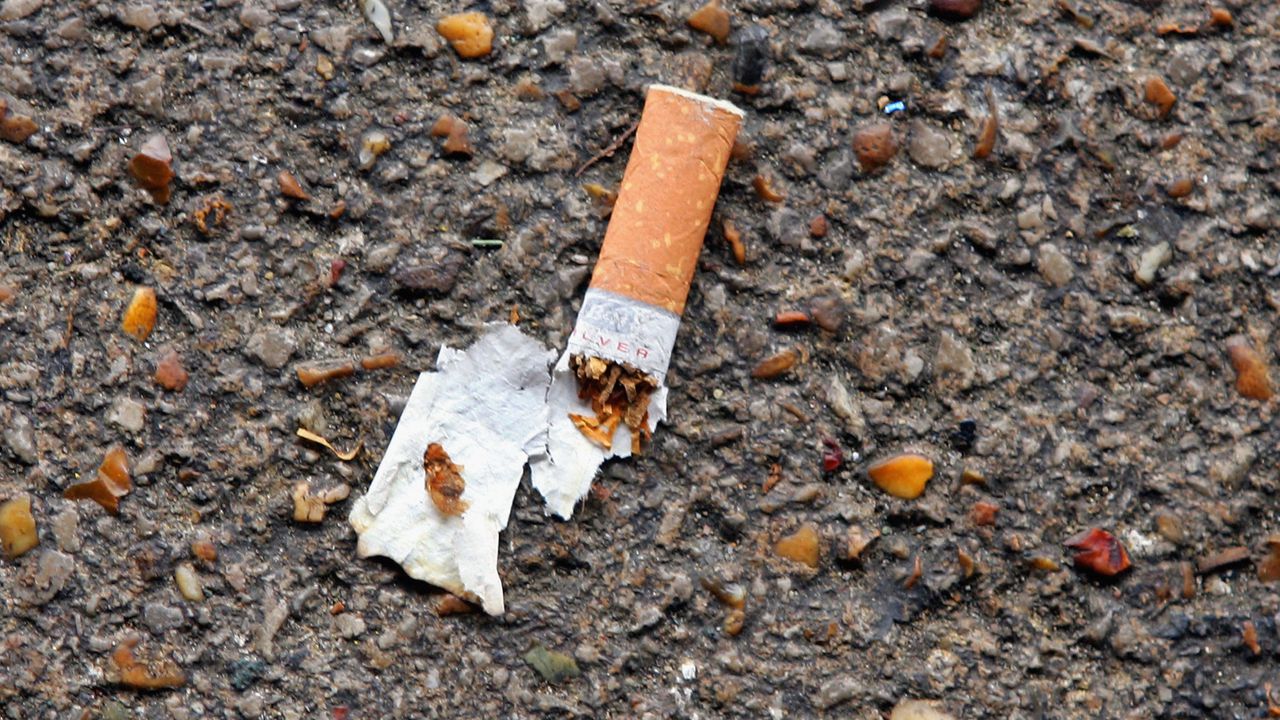 Fewer Americans are smoking than ever before

The number of adult Americans smoking cigarettes fell from 45.1 million in 2005 to 42.1 million in 2013 — the lowest number that the Centers for Disease Control and Prevention has recorded since it began surveying Americans on their smoking habits in 1965.

Even among those who do smoke, the Centers for Disease Control found reason for optimism. The percent of smokers who said they smoked daily declined from 80.8 percent in 2005 to 76.9 percent in 2013. And among daily smokers, the average number of cigarettes smoked daily dropped from 16.7 to 14.2. 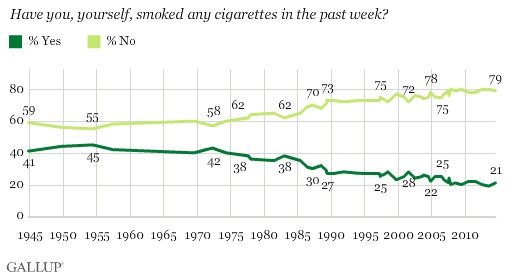 Smoking rates have fallen rapidly since the mid-1960s, when the surgeon general first warned of the harms that nicotine poses. The federal government added warning labels to cigarette packages, and then began to ban television ads for tobacco in 1969. In the 1970s, states began to ban smoking in public places. Indoor smoking bans followed in the 1990s.

At the same time, cigarette prices rose rapidly as states added excise taxes. The inflation-adjusted price for a pack of cigarettes grew from $1.80 in 1955 to $4.15 in 2008.

Some public health efforts, like those that try and reduce obesity or increase exercise, can take years or decades to work. But these policy efforts to tamp down on smoking worked quickly: the American smoking rate fell by halfbetween 1955 and 2008, from 43 percent to 20 percent.

Director of Centers for Disease Control and Prevention Dr. Tom Frieden speaks during a news conference after confirming that a patient at Texas Health Presbyterian Hospital has tested positive for Ebola, the first case of the disease to be diagnosed … more >

The confirmation Tuesday of the first Ebola case on U.S. soil emerges against a backdrop of increasing concern in America’s medical community that preparedness for a pandemic has stagnated or slipped in recent years because of tough economic times and increasing malaise since the 2001 anthrax threat.

The Centers for Disease Control and Prevention, America’s premier disease fighter, offered an air of confidence Tuesday in declaring that the first Ebola patient in Dallas was carefully contained.

But earlier this year, it sounded less optimistic about the U.S. health care system’s ability to fight a pandemic should a major disease outbreak occur.

“CDC continues to work with reduced financial resources, which similarly affects state, local, and insular public health departments. … These losses make it difficult for state and local health departments to continue to expand their preparedness capabilities, instead forcing them to focus on maintaining their current capabilities,” the CDC warned in a report this year.

CDC flagged several key trend lines, including congressional funding for public health emergency preparedness had shrunk by $1 billion from its highs shortly after the 2001 terrorist and anthrax attacks.

It also noted that state and local public health departments on the front lines of any health emergency have shed 45,700 jobs since the 2008 financial crisis.

The concerns, however, extend far beyond financial resources. The Department of Homeland Security inspector general issued a scathing report in September warning the department was woefully prepared for a pandemic, with expired medicines and inadequate resources to effectively equip its top responders in the field.

Statistics from the Centers for Disease Control and Prevention show intimate partner violence is more common than you may think.

Domestic violence isn’t limited to Ray Rice. Data show it is common in the U.S.

Half of women and half of men experience psychological aggression by a partner during their lifetimes, most often in the form of being “kept track of, demanding to know where you were and what you were doing” and “called names like ugly, fat, crazy, stupid.”

13-year-old Will Cornejo of Lone Tree, Colo., recovers at Rocky Mountain Hospital for Children in Denver from what doctors suspect is enterovirus 68. His parents found him unconscious on the couch and called 911. He was flown to Denver for treatment.

A rarely seen virus is sending children to the hospital with severe respiratory infections, and the federal Centers for Disease Control and Prevention is warning doctors and parents to be on the alert.

“Hospitalizations are higher than would be expected at this time of year,” Dr. Anne Schuchat, head of infectious diseases for the federal Centers for Disease Control and Prevention, said Monday at a press briefing on enterovirus 68. “The situation is evolving quickly.”

In August, health officials in Illinois and Missouri reported a surge in emergency room visits for severe respiratory illnesses in Chicago and Kansas City. That surge is continuing. Enterovirus 68 has been identified in 19 of 22 people tested in Kansas City, and 11 of 14 cases in Chicago. The sick patients have all been children and teenagers, and 68 percent have a history of asthma or wheezing, according to a report published Monday in Morbidity and Mortality Weekly Report. No one is known to have died.

So far about a dozen states have reported higher-than-usual numbers of severe respiratory infections, and the CDC is working with them to figure out if EV-68 is to blame, Schuchat says. “This is a very dynamic situation, an unusual virus, and we’re just beginning to understand it.”

Some patients have become sick enough to end up in the intensive care unit on oxygen. Many have wheezing, even those who don’t have asthma.

Enteroviruses are very common, with 10 to 15 million infections in the United States year. They usually cause mild illness, if they make people sick at all.

But EV-68 is a rarer critter. It was first identified in California in 1962, but then was almost never seen until 2009 to 2012, when there were outbreaks in Japan, the Philippines and the Netherlands, and small clusters of cases in the United States.

The strain of the virus in these current cases is not new, Schuchat says, and is the same as earlier EV-68 cases in the United States and in other countries. It’s unclear why it’s making people sicker and how it’s spreading, but respiratory viruses spread very easily. Cold season typically peaks in September when children return to school, and the enterovirus cases may be following a similar pattern.

And parents of children with asthma should make extra-sure that the children are taking medications and the asthma is well controlled, she adds.

There is no vaccine or specific treatment for EV-68.

In 2014, five children in California suffered a polio-like illness that left an arm or leg paralyzed. Two of those children tested positive for EV-68. There have been no reports of paralysis or other neurological system in the current cases, Schuchat said Monday.

“I can’t say if we’ll be seeing this in many more states or not,” Schuchat concluded. “It’s just too soon to say.”