Pension funds allege that a cartel of big banks made it artificially expensive to hedge against interest-rate risk.

Wall Street’s biggest and best are facing new accusations of market-rigging in a multi-billion class action suit from investors in the $320 trillion market for interest rate swaps.

The suit, filed Wednesday, accuses 10 of Wall Street’s biggest banks and two trading platforms of conspiring to limit competition from non-banks in the lucrative market for dealing interest rate swaps, the world’s most commonly traded derivative.

The banks “have been able to extract billions of dollars in monopoly rents, year after year, from the class members in this case,” the lawsuit alleged.

The suit was brought by The Public School Teachers’ Pension and Retirement Fund of Chicago, which purchased interest rate swaps from multiple banks to help the fund hedge against interest rate risk on debt. The plaintiffs are represented by the law firm of Quinn, Emanuel, Urquhart, & Sullivan LLP, which has taken the lead in a string of antitrust suits against banks.

As a result of the banks’ collusion, the suit alleges, the Chicago teachers’ pension and retirement fund overpaid for those swaps.

The suit alleged that since at least 2007 the banks “have jointly threatened, boycotted, coerced, and otherwise eliminated any entity or practice that had the potential to bring exchange trading to buyside investors.” 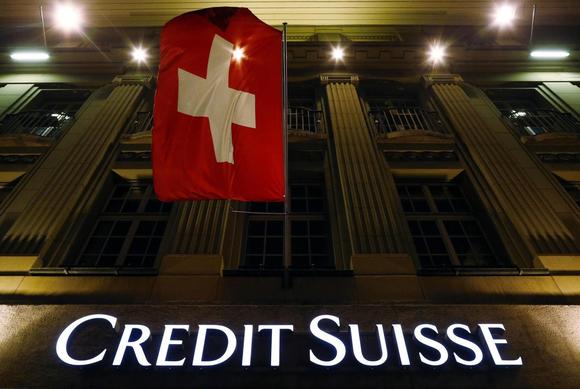 The logo of Swiss bank Credit Suisse is seen below the Swiss national flag at a building in the Federal Square in Bern May 15, 2014.

But the Swiss bank escaped the worst for its business – its top management stayed in place, and the New York state bank regulator said it had decided not to revoke the bank’s license in the state.

U.S. prosecutors said the bank helped clients deceive U.S. tax authorities by concealing assets in illegal, undeclared bank accounts, in a conspiracy that spanned decades, and in one case began more than a century ago.

“This case shows that no financial institution, no matter its size or global reach, is above the law,” Holder said at a news conference in Washington.

The Justice Department has not frequently pursued such convictions of financial companies, especially large ones that could become destabilized following an indictment, but U.S. politicians have pushed for tougher punishment for big banks in response to the 2007-2009 financial crisis.

Credit Suisse will pay financial penalties to the U.S. Department of Justice, the Internal Revenue Service, the Federal Reserve and New York’s banking regulator, the New York State Department of Financial Services, to settle the matter. It had already paid just under $200 million to the Securities and Exchange Commission.

“We deeply regret the past misconduct that led to this settlement,” Credit Suisse Chief Executive Brady Dougan said in a statement. “We have seen no material impact on our business resulting from the heightened public attention on this issue in the past several weeks,” he said.

The bank will take an after-tax charge of 1.6 billion Swiss francs ($1.79 billion) in the second quarter, it said, adding it will reduce assets, sell real estate and take other actions to keep its capital at strong levels.

Credit Suisse is the largest bank to plead guilty to a criminal charge in 20 years, Holder said.

Dougan, who has come under pressure from Swiss politicians to resign, and Chairman Urs Rohner would both stay in their jobs after the settlement, a person close to Credit Suisse said on Monday. Credit Suisse declined to comment.

Federal prosecutors are nearing criminal charges against some of the world’s biggest banks, according to lawyers briefed on the matter, a development that could produce the first guilty plea from a major bank in more than two decades.

In doing so, prosecutors are confronting the popular belief that Wall Street institutions have grown so important to the economy that they cannot be charged. A lack of criminal prosecutions of banks and their leaders fueled a public outcry over the perception that Wall Street giants are “too big to jail.”

Addressing those concerns, prosecutors in Washington and New York have met with regulators about how to criminally punish banks without putting them out of business and damaging the economy, interviews with lawyers and records reviewed by The New York Times show.

The new strategy underpins the decision to seek guilty pleas in two of the most advanced investigations: one into Credit Suisse for offering tax shelters to Americans, and the other against France’s largest bank, BNP Paribas, over doing business with countries like Sudan that the United States has blacklisted. The approach applies to American banks, though those investigations are at an earlier stage.

In the talks with BNP, which has a huge investment bank in New York, prosecutors in Manhattan and Washington have outlined plans to extract a criminal guilty plea from the bank’s parent company, according to the lawyers, who were not authorized to speak publicly. If BNP is unable to negotiate a lesser punishment — the bank has enlisted the support of high-ranking French officials to pressure prosecutors — the case could counter congressional criticism that arose after the British bank HSBC escaped similar charges two years ago.

Such criminal cases hinge on the cooperation of regulators, some who warned that charging HSBC could have prompted the revocation of the bank’s charter, the corporate equivalent of the death penalty. Federal guidelines require prosecutors to weigh the broader economic consequences of charging corporations.

Mike Segar/Reuters and Andrew Burton/Getty ImagesBenjamin M. Lawsky, left, New York’s superintendent of financial services, is one of the regulators who is said to have reached an understanding with prosecutors, like Preet Bharara.

With the investigation into BNP, the lawyers briefed on the matter said, prosecutors met in April with the bank’s American regulators: the Federal Reserve Bank of New York and Benjamin M. Lawsky, New York’s top financial regulator. The prosecutors who attended the meeting and are leading the investigation — Preet Bharara, the United States attorney in Manhattan; David O’Neil, the head of the Justice Department’s criminal division in Washington; and Cyrus Vance Jr., the Manhattan district attorney — left largely reassured.

In a recent speech to Wall Street lawyers, Mr. Bharara said this dynamic created a “gaping liability loophole that blameworthy companies are only too willing to exploit.”

Brady Dougan, Chief Executive of Credit Suisse is testifying before a US Senate Committee

The boss of Swiss bank Credit Suisse has said he “deeply regrets” that some of its bankers violated US tax laws.

But Chief Executive Brady Dougan said in a statement to a US Senate committee that there was only “scattered evidence” of improper conduct.

A US Senate report alleged the bank had helped US clients hide billions of dollars from the US taxman.

He said: “We deeply regret that – despite the industry-leading compliance measures we have put in place – before 2009, some Credit Suisse private bankers appear to have violated US law.”

“The evidence showed that some Swiss-based private bankers went to great lengths to disguise their bad conduct from Credit Suisse executive management.”

Mr Dougan disputed some of the findings of the report, saying the subcommittee wrongly assumed every US client account held in Switzerland was hidden from the US government.

He said the bank was fighting lawsuits in Switzerland from clients trying to prevent it from giving information to the US authorities.

“These are not the actions of an institution flouting US law enforcement or hiding behind Swiss law,” he said.

“It’s five years later, and the sad truth is that the era of bank secrecy is not over,” said Senator Carl Levin, a democrat from Michigan and chairman of the Senate committee that published the report.

“We have great concern that the battle to collect those unpaid taxes on hidden offshore assets seems stalled.”

During the Senate hearing, US politicians lashed out at Credit Suisse executives both over the bank’s behaviour and over the Swiss government’s perceived obstructions into helping US authorities identify Americans who are evading tax.

“The whole idea that the Swiss government is cooperating with us is a joke,” said Mr Levin.

He also scolded the DOJ for having only identified 238 client names from Credit Suisse out of 20,000 accounts.

“To collect those unpaid taxes and hold U.S. tax evaders accountable, the critical first step is to get their names,” he said.

According to the report, after Credit Suisse started phasing out its tax evasion practices, the number of Swiss accounts held by US clients at Credit Suisse fell by 85%.