How should one judge a president’s handling of foreign policy? Some focus on what happens in a few lonely moments of crisis, casting the nation’s leader as Horatius at the bridge or Casey at the bat. But a better analogy would be a member of a relay team or a middle relief pitcher: somebody who takes over from a predecessor, does a hard job for a while, and then passes things on to the next guy.

In baseball, there are special statistics used to judge such players, the hold and the blown save, which essentially tally whether the pitcher’s team keeps or loses the lead while he’s in the game. Looked at in such a light, Barack Obama has done pretty well. Having inherited two wars and a global economic crisis from the George W. Bush administration—the foreign policy equivalent of runners on base with no outs—Obama has extricated the country from some old problems, avoided getting trapped in some new ones, and made some solid pickups on the side.

There have been errors, wild pitches, and lost opportunities. But like George H. W. Bush and Bill Clinton, Obama will likely pass on to his successor an overall foreign policy agenda and national power position in better shape than when he entered office, ones that the next administration can build on to improve things further. Given how many administrations fail even that limited test, such an accomplishment is worthy of praise rather than the contempt the administration’s foreign policy often receives.

The key to Obama’s success has been his grasp of the big picture: his appreciation of the liberal international order that the United States has nurtured over the last seven decades, together with his recognition that the core of that order needed to be salvaged by pulling back from misguided adventures and feuds in the global periphery. The president is variously painted as a softheaded idealist, a cold-blooded realist, or a naive incompetent. But he is actually best understood as an ideological liberal with a conservative temperament—somebody who felt that after a period of reckless overexpansion and belligerent unilateralism,  the country’s long-term foreign policy goals could best be furthered by short-term retrenchment. In this, he was almost certainly correct, and with the necessary backpedaling having been accomplished, Washington can turn its attention to figuring out how to  get the liberal order moving forward once again.

25 Years In Iraq, With No End In Sight – GREG MYRE

U.S. Marines arrive at Saudi Arabia’s Dhahran Air Base on Aug. 21, 1990. The U.S. began a buildup in the region just days after Iraq invaded Kuwait on Aug. 2 of that year. The U.S. military has been active in Iraq virtually nonstop for the past quarter-century. Gerard Fouet/AFP/Getty Images

It started so well. When Saddam Hussein’s Iraq invaded Kuwait on Aug. 2, 1990, the United States swiftly cobbled together a broad coalition, unleashed a stunning new generation of air power and waged a lightning ground offensive that lasted all of four days. Iraqi troops were so desperate to quit that some surrendered to Western journalists armed only with notebooks.

Kuwait was liberated, U.S. commander Gen. Norman Schwarzkopf was a hero, and the pundits confidently declared the U.S. had buried its “Vietnam syndrome,” the fear of being sucked into a quagmire. In the annals of war, it doesn’t get much easier than this.

So on the 25th anniversary of that first Iraq conflict, how is it possible that the U.S. is still entangled in a messy, complicated war with no end on the horizon?

Iraq President Saddam Hussein is shown in Baghdad in January 1991, just before the first U.S. war in Iraq. The American forces would oust the Iraqi leader 12 years later in a second war.

Aside from an intermission from December 2011 until August 2014, the U.S. military has been rumbling through the sweltering sands or soaring over the desert skies for this entire quarter-century, a military engagement unparalleled in U.S. history.

Before the first Iraq battle, the U.S. had never fought a large-scale war in the Middle East. Yet freeing a tiny Gulf emirate from Saddam’s clutches has morphed into a seemingly permanent state of war, metastasizing to so many countries it’s tough to put a precise number on it.

“Before 1990, the region was a secondary or even tertiary area of importance to Washington. The United States had rarely deployed military forces in the region,” Bruce Riedel, a former CIA official now at the Brookings Institution, wrote recently. “What had been a backwater for the U.S. military has become since 1990 the principal arena of conflict. This shows no sign of ending anytime soon.”

The U.S. military involvement has spanned four presidencies and a panoply of evolving goals.

In rough order, the shifting aims have been to reverse Saddam’s aggression, ensure the safe flow of oil from the Gulf, contain Saddam, oust Saddam, search for nonexistent weapons of mass destruction, build democracy, pummel al-Qaida in Iraq, and currently, suppress the self-proclaimed Islamic State. If there’s a unifying theme, it’s the U.S. forecasts that have consistently been too optimistic.

“It’s been a 25-year-long enterprise, with different aims and approaches, none of which have yielded the results promised,” said Andrew Bacevich, a retired Army colonel who served in Iraq and now teaches international relations at Boston University.

The U.S. policies have included five distinct phases. Here’s a closer look at them and their consequences:

1. Overwhelming Force (1991): The world was turning America’s way when, after a six-month military buildup, the U.S. began bombing Iraq on Jan. 17, 1991. The Berlin Wall had fallen, the Soviet Union would crumble by year’s end and the U.S. was the lone superpower.

The brief war only reinforced the notion that the U.S. was uniquely positioned to remake the global order in the wake of the Cold War. The only debate at the end of the first Iraq war was whether the U.S. squandered an opportunity by not advancing all the way to Baghdad, ousting Saddam and occupying Iraq.

Iraqi antiaircraft fire lights up the skies over Baghdad in response to U.S. warplanes that bombed the Iraqi capital in the early hours of Jan. 18, 1991. The U.S. campaign drove the Iraqis out of Kuwait in a little over a month.

But President George H.W. Bush cautioned against the risks of taking over Iraq. His top military adviser, Gen. Colin Powell, summed it up with the “Pottery Barn rule” – if you break it, you own it.

Bush wanted to withdraw the troops as quickly as possible to avoid any potential complications. His successors have had similar instincts, yet each American drawdown in Iraq has been followed by a fresh wave of forces at a later date.

“The 1991 war was quick and easy and created the myth that this is how we could fight wars now,” said James Dubik, a retired general and Iraq veteran who’s now at the Institute for the Study of War in Washington. “This set us up for a misunderstanding of how to wage war in the years that followed.”

There were other unanticipated consequences. Osama bin Laden would cite the presence of U.S. troops in Saudi Arabia — sent in the run-up to the war and remaining in its aftermath — as one of his main grievances against the U.S.

Every Republican presidential hopeful knows the GOP has a major problem attracting minority voters — and it looks like Jeb Bush just might think he’s the guy to fix it. 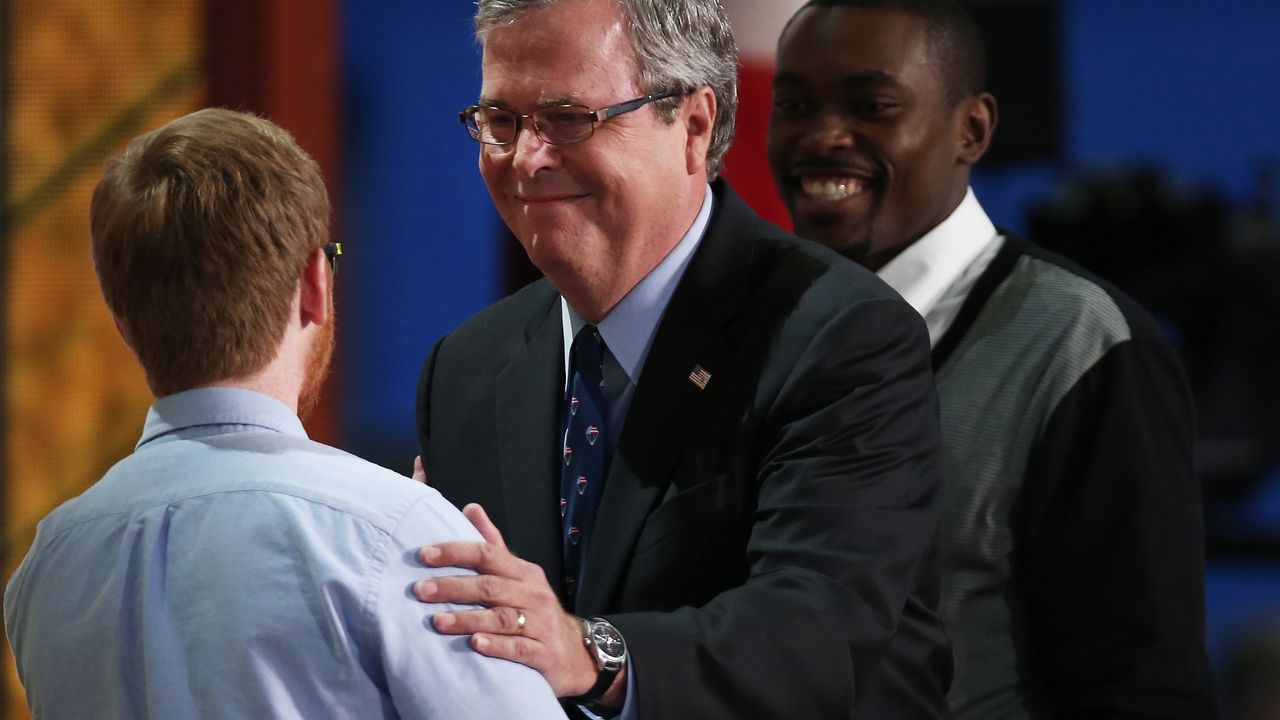 Every Republican presidential hopeful knows the GOP has a major problem attracting minority voters — and it looks like Jeb Bush just might think he’s the guy to fix it.

Yes, the former Florida governor, brother of George W. Bush, and son of George H.W. Bush appears to have decided he’ll be the one to strip his party of the “party of old white men” label. Don’t believe it? Just check out the website for his newly announced leadership PAC, Right to Rise.

The launch of the PAC is the clearest sign yet that Bush will jump into the 2016 race — and a study of RighttoRisePac.org reveals some major hints about what he’ll do to distinguish himself if he does run: embrace groups his party has long struggled to engage, including African-American and Hispanic voters. In fact, the content and tone of the site suggest that he’s already — very subtly, but very deliberately — working to court them.

As Politico’s Katie Glueck and Tarini Parti pointed out, the GOP is not big on identity politics. So we can trust that none of the possible 2016 candidates — not African-American Ben Carson or Indian-American Bobby Jindal — are going to play up their race or ethnicity. Instead of talking about breaking barriers or explaining how they’ll benefit a particular demographic group, chances are, they’ll probably “hit broader themes such as the American dream and the importance of hard work.”

In other words, in today’s Republican party, a white guy like Jeb Bush has just as good a chance as anyone at being 2016’s “diversity candidate.”  And if his new PAC’s website is any indication, he knows that and plans to go for it.

Here’s what stands out at Righttorisepac.org:

“We will not cede an inch of territory — no issues, no demographic groups, no voters — as we unite our citizens to strengthen America through greater economic growth and widespread prosperity,” reads a statement under the Right to Rise’s “What we believe” tab. Key words: “no demographic group.” We all know which ones Republicans have historically struggled to impress.  Here, Bush isn’t saying that they’ll vote for the GOP if they know what’s good for them, or whining that blacks have been brainwashed by Democrats, or harnessing racial anxiety to target more of the white vote while alienating people of color. Rather, he’s conveying that it’s Republicans’ responsibility to convince people of every race to vote for them. That’s a big commitment — not to mention a much more appealing tone that we’re used to from his fellow Republicans.

The site is wallpapered with a rainbow of Americans 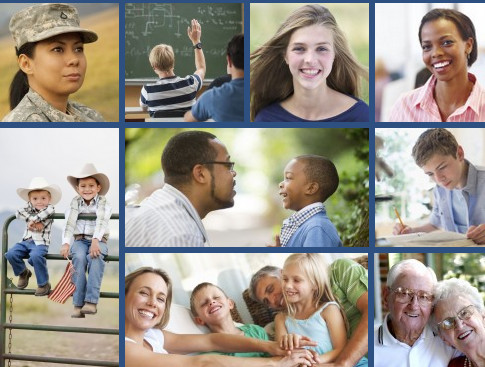 The Jimi Hendrix Experience – All Along The Watchtower (Official Audio)