Why this isn’t a “limited” ruling

In a 5-4 decision, the Supreme Court ruled Monday that Hobby Lobby can ignore federal law and deny its employees comprehensive health insurance because of its “sincerely held religious beliefs.” Analysis of the case has so far called this a limited ruling because it only applies to closely held corporations and “only” impacts contraceptive coverage. But this framing completely ignores the fact that more than 90 percent of corporations in the United States are closely held, and that the court just effectively ruled that it’s fine for employers to discriminate against half of the labor force. There’s nothing limited about it. As Justice Ruth Bader Ginsburg noted in her powerful dissent, far from being narrow in its ruling, the high court just “ventured into a minefield.”

So what does the decision actually mean? In the immediate term, it means that women who work at Hobby Lobby and Conestoga Wood Specialties are paying for health coverage (insurance is part of their compensation package, it’s not some gift bestowed upon them by their bosses) that their employers have decided that they can’t have. That’s really what this comes down to in the most blunt terms imaginable. The religious owners of these companies havemedically inaccurate ideas about contraception and abortion, and they now get to impose those ideas on the the people who work for them. In the majority opinion, five male justices argued that the Department of Health and Human Services can fill in the gaps in coverage created by this ruling by including for-profit companies in the accommodation system created for religious nonprofits and other explicitly faith-based organizations. Women’s health, it seems, has become someone else’s problem.

This is certainly bad news for the women who work at both of these places, but it’s bad news for the rest of us, too. The ruling sends a strong message that women’s health and women’s rights — as individuals and employees — do not matter as much as so-called religious liberty. It also shows once again that medically inaccurate ideas about healthcare can dictate the terms of a debate and ultimately win the day. Writing for the majority, Justice Samuel Alito argued that contesting Hobby Lobby’s claim that contraception is the same thing as abortion — an idea that has been refuted time and again by medical providers and associations — “in effect tells the plaintiffs that their beliefs are flawed.”

And as Ginsburg alluded to in her dissent, the decision opens the door to other sweeping forms of discrimination. While Hobby Lobby based its claim in its apparent objection to four forms of emergency contraception (contraception that the company covered without issue prior to the new healthcare law), other companies challenging the requirement object to all forms of contraception. Those beliefs are just as sincerely held, and just as dangerous to women’s health. The legal precedent now tips in their favor.

The opinion also raises the question of whose religious beliefs matter. Conservatives are hailing this as a victory for freedom of religion, but what about the religious employees at Hobby Lobby who don’t share the views of the Green family? The Greens’ profoundly unscientific and extreme views about contraception are not even universally accepted among Christians. Where’s their religious liberty in this? And for the women whose religious liberty is freedom from religion? Where are they in this opinion? “The Court puts claims of corporations over those of its employees and allows a corporation’s owners to override the Federal rights of its employees, many of whom have a different set of religious beliefs,” Ginsburg wrote in her dissent.

And this is one of the ways that the framing of this case has been off from the start. The lawyers for Hobby Lobby presented the legal challenge as though it were the religious lobby versus the reproductive rights lobby, and many in the media accepted these terms. But religious people use contraception — including emergency contraception. People of faith also have a major stake in keeping employers from imposing religious views on employees. The fault lines in the case have never been as clean as some would like you to believe.

To sum it up, five male justices ruled that thousands of female employees should rightfully be subjected to the whims of their employers. That women can be denied a benefit that they already pay for and is guaranteed by federal law. That contraception is not essential healthcare. That corporations can pray. That the corporate veil can be manipulated to suit the needs of the corporation. That bosses can cynically choose à la carte what laws they want to comply with and which laws they do not. Each specific finding opens a door to a new form of discrimination and unprecedented corporate power. If you think this ruling won’t affect you, you haven’t been paying attention. If you think these corporations are going to stop at birth control, you’re kidding yourself.

Close
In a rare 90-minute session, the Supreme Court on Tuesday dug deep into the religious-freedom challenge Hobby Lobby and Conestoga Wood Specialties are mounting against the Obamacare contraception mandate.

As in other high-profile cases, court-watchers examined every question, comment, twitch and grimace in a quest to divine where the justices are headed. Of course, it’s a truism that justices’ remarks at arguments don’t always reflect where they will ultimately come down in a case.

But the comments — and quips — are still our best guide to where justices are at the moment. In that spirit, here’s POLITICO’s take on where the nine justices appear to stand after Tuesday’s proceedings:

On the fence, but leaning toward the companies

Kennedy is often the man to watch in hotly contested Supreme Court cases, and he didn’t disappoint on Tuesday, asking questions that tracked with both sides’ arguments and managed to obscure his overall view.

At the outset of the arguments, Kennedy seemed troubled by the idea of allowing employers’ religious choices to override those of their workers. “You can have hypotheticals about the employer makes them, wants to make them wear burkas and so forth. That’s not in this case. The employee may not agree with these religious beliefs of the employer. Does the religious beliefs just trump? Is that the way it works?”

Later, Kennedy threw a slow-pitch softball to Solicitor General Donald Verrilli about how allowing exemptions for for-profit companies would undercut the overall operation of the health care law.

(Also on POLITICO: Honey, I shrunk the mandate)

“Is it your position that part of the compelling interest here is that you have to protect the integrity — the operational integrity of the whole act?” the justice asked.

“It is part of our argument, absolutely,” Verrilli replied.

That prompted Kennedy to joke that the court better look at the whole law then — something it memorably did two years ago.

However, the Reagan appointee quickly turned on the government. First, there were several biting questions about exemptions the administration granted to various entities, undercutting arguments that protecting for-profit companies’ religious beliefs would unravel Obamacare.

Then, Kennedy walked Verrilli into a buzzsaw, claiming that the administration’s position was that companies could lawfully be required to provide not only contraception, but also surgical abortion if a law required it.

”Under your view, a [for-]profit corporation … could be forced in principle to pay for abortions,” he said. “Your reasoning would permit that.”

At the end, Kennedy’s vote still seemed up in the air, but his use of the powerful abortion example, coupled with his references to already-granted exemptions, suggest he’ll rule that the law requires the Obama administration to accommodate the family-owned firms’ religious concerns.

Read about the rest of the judges:

Late Wednesday, Gov. Jan Brewer vetoed Arizona’s Senate Bill 1062, a measure that would have made it easier for businesses to discriminate against gays and lesbians on the grounds of sincerely held religious beliefs. Facing backlash that, in her own words, threatened to “divide Arizona in ways we cannot even imagine,” the Republican governor squashed the bill’s chances of becoming law.

But her veto and the legislation’s swelling controversy did more than kill the bill in the Grand Canyon State; Brewer’s action effectively vetoed similar legislation for every state in the country.

At one point, legislation that moved quickly in more than a dozen states dominated headlines. Now, the issue looks to be a shooting star, one that lit up the national debate on equality before fading away–at least for the foreseeable future.

From Georgia to Hawaii, religious freedom bills have stopped dead in their tracks as supporters scramble to put distance between their measures and SB 1062. Though these bills may resurface, it likely will not be during this legislative session.

Here’s a breakdown of state measures that now look to be doomed: 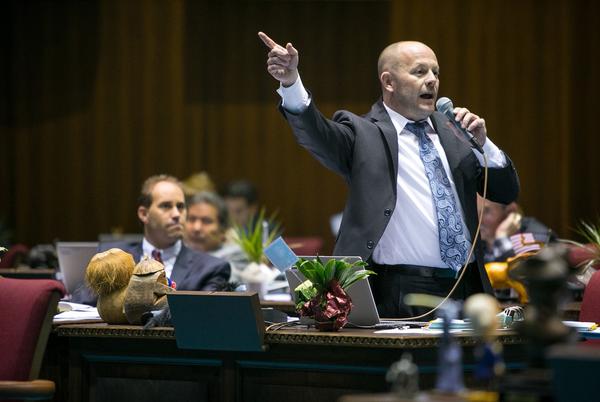 TUCSON — Say a gay couple in Phoenix walks into a bakery to order their wedding cake. The baker refuses to take their order because of his deeply held religious beliefs. Under a measure that passed the Arizona Legislature this week, the baker would have greater protection to invoke religion to shield himself from a discrimination lawsuit.

The bill, approved by the Republican-controlled Senate on Wednesday and theGOP-led House on Thursday, would bolster a business owner’s right to refuse service to gays and others if the owner believes doing so violates the practice and observance of his or her religion.

The state Senate passed it on a straight party-line vote, 17 to 13. The House followed suit, 33 to 27, with two Republicans joining all the Democrats in opposition.

GOP Gov. Jan Brewer’s office said she would not take a position until she’d had a chance to review the measure.

Proponents contend the bill is about protecting religious freedom, rights that “must be respected,” said Republican Sen. Steve Yarbrough, who introduced the measure.

Republican Rep. Eddie Farnsworth, a House sponsor, said there had been an “onslaught of attacks on religious freedoms.” The bill, he said, “is trying to protect those freedoms.”

But opponents, including Democratic lawmakers and gay activist groups, describe the bill as unconstitutional, discriminatory and divisive.

It would “permit discrimination under the guise of religious freedom,” said Sen. Ana Tovar, a Democratic leader.

Democrat Chad Cambpell of Phoenix, the House minority leader, tweeted after the bill passed: “The world is upset with how Russia has treated gay rights…I think it’s time for that same anger to be directed towards AZ.”