The National Rifle Association released a new election ad today attacking Question 3 on Maine’s November ballot, which would require background checks on most transfers of guns between owners.

The NRA’s ad points out that former New York Mayor Michael Bloomberg, now a prominent gun control activist and the founder of Everytown for Gun Safety, “is spending $3 million to try and boss Mainers around with Question 3.” The ad opens with a view of a city skyline and the words “The New Yorkers” emblazoned below it. The narrator intones: “The New Yorkers are here and they’re trying to tell Mainers how to live.” There’s just one problem: The skyline in this ad is most definitely San Francisco’s, not New York’s.

Here’s the start of the ad:

To its credit, the NRA did remember to add a Statue of Liberty to its version—and yet somehow didn’t notice in the process that the rest of the skyline was wrong, or just didn’t care to use the right one.

You Say You Want a Revolution, the V&A’s new exhibition, explores the birth of late-1960s counterculture that helped spawn Silicon Valley. Alex Needham takes a tour of where it all began, guided by former hippies and subversive visionaries

On 12 July 1967, Florida newspaper the St Petersburg Times had an eye-catching front-page headline: “Dame Margot, Nureyev seized in hippie raid.” Police had busted a party in Haight-Ashbury, San Francisco, and unexpectedly ensnared two world-famous gatecrashers: Margot Fonteyn and Rudolf Nureyev, who had been in the city all of four hours. “Marijuana cigarettes were found at the scene,” noted the paper, although the two ballet dancers had to be released as there was no evidence that they had been smoking them. A high-spirited Nureyev had, however, performed a jeté into the back of a police van.

Fonteyn and Nureyev were two of an estimated 100,000 people who descended on San Francisco to locate the action during the drugged-up summer of love. It turned out that everything was happening. There were anti-Vietnam protests on the campus at Berkeley; Oakland’s African-American revolutionary movement, the Black Panthers, marched on the state capitol while openly armed; and bands such as the Grateful Dead, Jefferson Airplane and Big Brother and the Holding Company, fronted by Janis Joplin, performed on stage at venues such as the Avalon and the Fillmore, their acid-sodden psychedelia expressing the preoccupations of counterculture from surrealism to sex.

Add performance artists and community activists such as the Diggers – who, freaked out by the weekenders, announced the death of the hippie in October 1967 and staged a mock funeral – to the retina-searing, tripped-out aesthetics of the time on record sleeves, gig posters and in fashion, and you had an unprecedented mass experiment. The subject was the rejection of conventional society with its racism, warfare and repression; and the construction of alternative realities. All this was duly transmitted by an astounded mass media to living rooms around the world, while records such as the Beatles’ 1967 album Sgt Pepper’s Lonely Hearts Club Bandformed a clarion call for the counterculture on both sides of the Atlantic. Two weeks after its release on 1 June, it was played over the speakers at Monterey Pop, arguably the first music festival.

Come 2017, selling any polystyrene product will be prohibited.

San Franciscans, bid adieu to Styrofoam. On Tuesday, the city unanimously passed an ordinance banning the sale of any product made from polystyrene, the petroleum-based compound that’s molded into disposable dishware, packing materials, and beach toys—among other things. Even though it’s commonly known as Styrofoam, that’s just a name-brand owned by the Dow Chemical Company.

It’s not SF’s first such restriction. In 2007, the city prohibited the use of polystyrene use in all to-go food containers. More than 100 cities, along with Washington, DC, now have similar laws in place. (The first Styrofoam ban was passed in 1988 by the city of Berkeley.) But San Francisco’s new ordinance, part of the city’s goal of “zero waste” by 2020, is the broadest yet. As of January 1, 2017, it will be unlawful to sell polystyrene packing materials (those infuriating foam peanuts, for instance), day-use coolers, trays used in meat and fish packaging, and even foam dock floats and mooring buoys.

Polystyrene’s story begins in the first half of the 20th century, but it didn’t become a staple of our everyday lives until the second half, when world production of plastic resins increased 25 fold. Before long, polystyrene was synonymous with take-out food, barbeque plates, and disposable coffee cups—Americans today still use an estimated 25 billion foam cups each year. 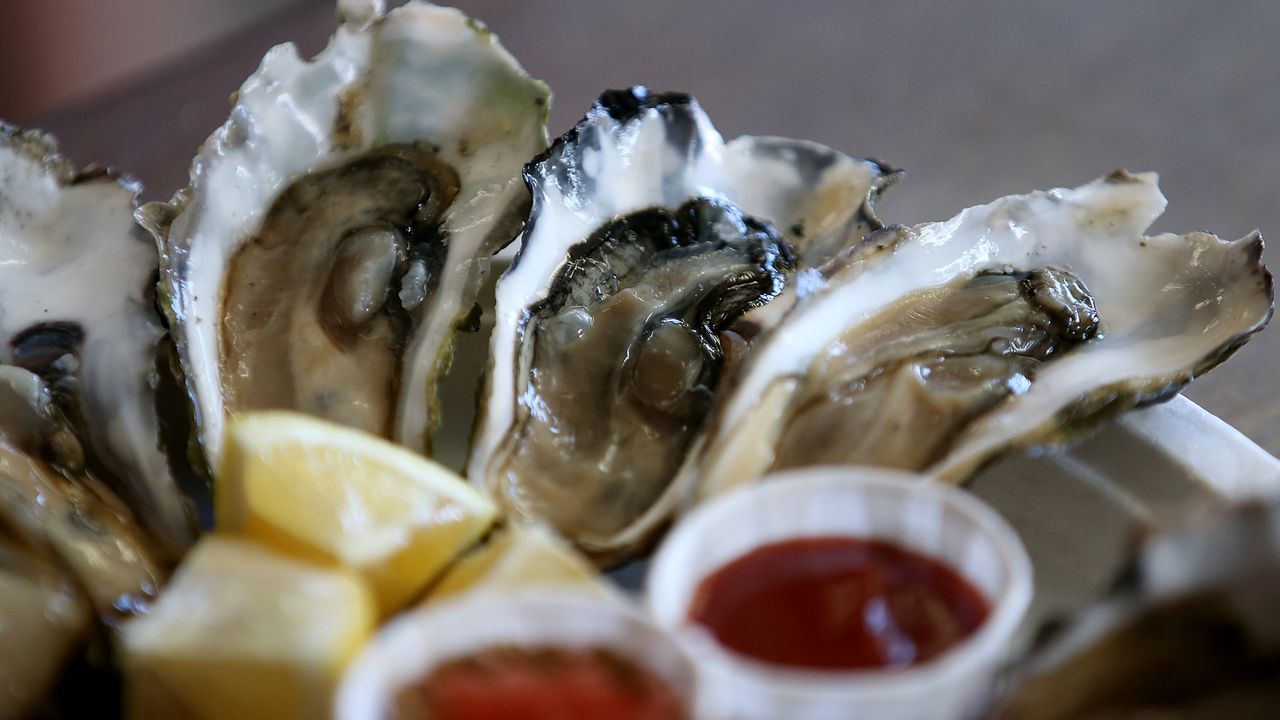 Freshly shucked oysters sit on the counter at Drakes Bay Oyster Co. on the final day of retail and canning operations on July 31, 2014, in Inverness, California. — Justin Sullivan/Getty Images

For more than a decade, people in the San Francisco Bay Area fought viciously over oysters. The controversy: Would the National Park Service allow the Drake’s Bay Oyster Farm — located in the Point Reyes National Seashore, just north of San Francisco — to continue operating after its lease expired in 2012, or would it convert the land to wilderness? If you want the full story, Susie Cagle did a nice piece about it here. The debate raged for years and made headlines around the country. It caught people’s interest, in part, because it looked like a test case for a philosophical dilemma greens have been trying to resolve.

A new book on this saga, The Oyster War: The True Story of a Small Farm, Big Politics, and the Future of Wilderness in America, by Summer Brennan, provides a comprehensive look at the conflict. When taken in as a whole, the issue looks a little different. Yes, in some ways this was a referendum on land sparing versus land sharing; but this story, in Brennan’s telling, is really about the way we make land-use decisions and the political tactics we deploy to sway those decisions.

Let’s pick up the story when some local ranchers, the Lunny family, bought the oyster farm from their neighbors, the Johnsons. It was in poor shape; there was sewage leaking into the estuary. The Johnsons had just eight years left on their lease with the National Park Service and had been unable or unwilling to fix things up. Then, Brennan writes:

In early 2005 the Lunnys, a cattle ranching family from a half mile down the road, took over. Since then it had been the Drakes Bay Oyster Company — the infamous Drakes Bay Oyster Company, if you will, whose plight has garnered national media attention. Its opposing sides had brought together strange bedfellows, from anti-government militia groups to locavore celebrity chefs, and its fate had been debated heavily and contentiously across the country. Was the company causing environmental harm? Or had it been framed, the victim of government fraud?

Was the oyster farm doing environmental harm? The public debate turned on this question. Pro-oyster-farm people said the bivalves were filling in for missing native oysters and that they were cleaning up the water. Pro-wilderness people said oyster feces were fouling the water.

All of this was hyperbole. Yes, oysters filter water, but they filter out algae, and there wasn’t an excess of algae in the estuary. And yes, oysters poop, but the waste wasn’t causing major problems. What about the claim that oysters were needed to replace the long-lost natives? Well, Brennan’s research suggests that there were no native oysters — at least not in the past few hundred years. There was the Olympia oyster, which fed merchants and miners who had struck it rich during the Gold Rush, but those were not native. Businessmen had brought the Olympia oysters down from Washington state and farmed them in the San Francisco Bay from 1851 on. “The native California oyster, at least as it would have existed in the 19th century, is a myth,” Brennan writes.

There was also much debate over whether the oyster farm disturbed harbor seals, but the data was inconclusive. It was clear that plastic, timber, and other bits of material from the farm were ending up in the water. There were innumerable presentations, studies, and studies of the studies hashing all this out. In the end, Brennan writes, it all boiled down to this:

“Was the oyster farm causing harm? Maybe. Was it very severe? Probably not but we didn’t know yet. Could it be mitigated through an adaptive management approach? Most likely.”

That doesn’t really provide a clarion mandate for either side. In the end we are left with a simple question: What do people want?

Willy Loman, the beleaguered road warrior of “Death of a Salesman,” wouldn’t recognize the technology-dependent sales staff at GuideSpark Inc.

Employees on the sales floor of the Menlo Park, Calif., human-resources software firm lean on more than a dozen digital aids. One analyzes records of millions of transactions stored in sales databases to serve up lists of potential customers, ranking them in order of their likelihood to buy. If a prospect doesn’t pick up, another program, at the click of a mouse, leaves a voice-mail message from a prerecorded template. When a salesperson closes a deal, a third program triggers a morale-boosting gong sound.

Letting a computer determine the hottest prospects may sound questionable, but GuideSpark Chief Executive Keith Kitani believes this and other data-driven features have dramatically boosted his team’s productivity. His 70-person sales crew makes triple the number of calls and meetings it did two years ago. Revenue has picked up as staffers pare time spent on rote tasks, such as manual record-keeping and researching prospects, and focus on the most promising leads.

Silicon Valley startups are automating sales departments for a shot at the more than $23 billion companies spend each year on sales software. Some of these startups mine sales staff emails, calendars, social-media feeds as well as news articles and customer databases for patterns that help them predict the likelihood of a sale or the behavior of potential buyers.

Such companies have amassed roughly $400 million in venture capital in the last two years, according to data from Dow Jones VentureSource. (VentureSource is owned by News Corp, publisher of The Wall Street Journal.)

For some in San Francisco the tech boom has brought wealth, but the city also has one of the highest rates of homelessness in the United States.

Some in the tech community are trying to help including Hand Up, a company which is linking donors directly to members who need support.