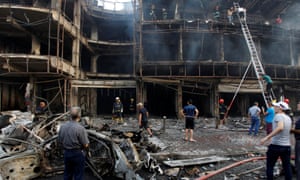 At least 83 people have been killed and 176 wounded in two separate bomb attacks in Baghdad, Iraqi officials have said.

In the deadliest attack, a car bomb hit Karada, a busy shopping district in the centre of the Iraqi capital, killing 78 people and wounding 160, according to police and hospital officials. It struck as families and young people were out on the streets after breaking their daylight fast for the holy month of Ramadan on Sunday morning.

Islamic State claimed responsibility for the bombing in a statement posted online, saying it had deliberately targeted Shia Muslims. The statement could not be independently verified.

Firefighters were still working to extinguish the blazes and bodies were still being recovered from charred buildings at dawn on Sunday. Many of the dead were children, according to reporters at the scene. Ambulances could be heard rushing to the site for hours after the blast. A witness said the explosion caused fires at nearby clothing and cellphone shops.

In the second attack, an improvised explosive device went off in eastern Baghdad, killing five people and wounding 16. No group claimed responsibility for the attack.

The casualty figures were confirmed by police and hospital officials, who spoke anonymously because they were not authorised to release information to the press.

For the past 40 years, the greatest threats to the West have emerged from oil-exporting states. Oil funded Iraq’s invasion of Kuwait, Libya’s support for terrorist groups, and the build-up of the Soviet Union’s nuclear arsenal in the 1970s and 1980s. More recently, it has funded the rise of the Islamic State (also known as ISIS), Russia’s aggression in Crimea, and Iran’s support for Hamas and Hezbollah.

Oil provides rulers with a source of unaccountable power, perhaps the largest such source in the world. Outside of democracies, oil revenues flow to whichever regime or armed group controls the wells by force. These revenues allow leaders to dominate their people through coercion and patronage (as in Iran and Russia) and provide armed groups with the resources to wage civil war (as in Iraq and Yemen). They have also empowered regimes to indoctrinate their populations with intolerant ideologies and, especially in the case of Saudi Arabia, to spread those ideologies worldwide.

The unaccountable power of oil explains what the political scientist Michael Ross calls “the oil curse.” Oil states are 50 percent more likely to be authoritarian than are non-oil states, and between 1980 and 2013, oil-producing autocracies were four times less likely to transition to democracy than their non-oil-producing peers. Oil states in the developing world are also more than 200 percent more likely to suffer civil wars; 25 percent of oil states are currently embroiled in one (compared with 11 percent of non-oil states). According to Ross, oil states are today no richer, no freer, and no more peaceful than they were in 1980—a marked contrast to most states in the developing world, which have made significant economic and political progress since then. More than 50 percent of the world’s traded oil today comes from authoritarian or failed states.

Western policymakers have tried three main strategies to check the power of oil in nondemocratic exporters. At times, they have formed alliances, hoping to influence an authoritarian regime to favor their own national interests. The United States, for example, maintained ties with the shah of Iran until he was overthrown in 1979, with Iraqi President Saddam Hussein from the early 1980s to 1990, and with Libyan ruler Muammar al-Qaddafi from 2003 to 2011—and remains a close ally of the Saudi regime.

At other times, Western policymakers have imposed sanctions on oil states, including Iran, Iraq, Libya, Russia, Sudan, and Syria. And Western nations have also resorted to military action, including major interventions in Iraq (twice) and Libya.

Hundreds of people gathered at the historic square in the Belgian capital overnight. On Tuesday, double terror attacks on Brussels’ airport and subway claimed at least 31 lives. The evening vigil at the Place de la Bourse was a focus point of solidarity. Many attendees also expressed messages of resilience and hope.

The Supply Chain of Terrorism

While in Iraqi Kurdistan in January of last year, a European investigator came across a field of holes into which improvised explosive devices (IEDs) had been placed. The dots went out in a line as far as the eye could see. “They had been placed this way so that anybody who crossed that field would strike an IED,” the researcher told me, asking that his name be withheld for safety reasons.

For the past 20 months, along with a colleague, he has been meticulously examining the supply chains of the more than 700 IED components that the Islamic State (ISIS) uses in Iraq and in the Syrian Kurdish region of Rojava. Their findings were released in a report in late February, the latest addition to a catalog of documents on ISIS weapons published by Conflict Armament Research (CAR), a private arms-tracking organization mandated by the European Union.

IEDs can be made from a variety of military and non-military materials, and they can be deployed and activated in various ways, ranging from roadside bombs and landmines to car bombs. Although they have been used for decades, the term came into routine use by the U.S. military between 2002 and 2003 in the Iraq war. The first IED casualty in that conflict came on March 29, 2003 when four soldiers died as a result of a car bomb.

After leaving office in 2007, former UK Prime Minister Tony Blair endured criticism for his role in the Iraq War and controversy surrounding his selection as a United Nations peace envoy in the Middle East.

No longer an envoy, Blair has now come to the Center for Strategic and International Studies in Washington, DC to kick off a commission on countering violent extremism (CVE). Together with his co-chair, former CIA director and Secretary of Defense Leon Panetta, Blair plans to provide the next US president with advice on combating what he sees as an existential threat.

VICE News sits down with Blair to discuss what he, Panetta, and the CVE commission hope to achieve.

Watch “The Girls Who Fled To Syria: Groomed By The Islamic State” – http://bit.ly/1IQ374T 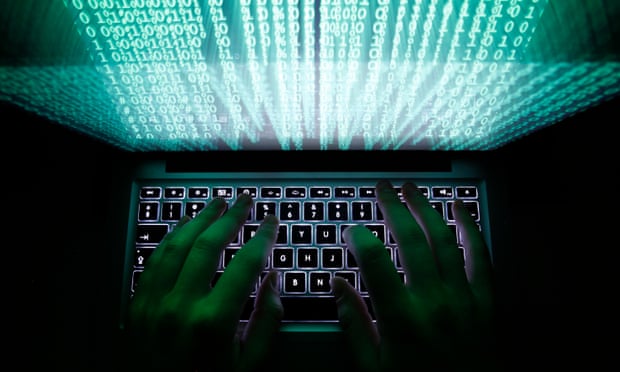 The White House will attempt to enlist Silicon Valley’s major technology firms in its efforts to combat terrorism on Friday when a delegation of the most senior intelligence officials fly to California to meet with executives from companies including Facebook, Twitter, Apple, Microsoft, YouTube and others.

A copy of the agenda obtained by the Guardian indicates the White House seeks more or less to channel Silicon Valley’s talent into its war against Islamic State and other extremist groups.

According to people familiar with the meeting, it will take place at 11am PST in a government building in San Jose, just south of where many of the firms are headquartered.

Other tech participants include LinkedIn and Dropbox, two of the people said. None of the individuals who briefed the Guardian were authorised to speak about the meeting on the record.

In October 2013, an American man named Syed Rizwan Farook traveled to Saudi Arabia to meet a Pakistani woman who lived there named Tashfeen Malik. They had connected on a dating website and, after exchanging some messages, decided to meet in person. They apparently connected well enough that in July 2014, Farook flew back to Saudi Arabia, where he and Malik married. They returned to the United States, with Malik entering the country on a K-1 visa for fiancées, and settled in Farook’s home in California.

A year and a half later, in December 2015, Farook and Malik executed the deadliest shooting attack since Sandy Hook and what some analysts consider the deadliest US terrorist attack since 9/11, killing 14 people in San Bernardino. After launching the attack, Malik posted a message to Facebook that authorities say, while partially garbled, appeared to pledge allegiance to Abu Bakr al-Baghdadi, the leader of ISIS.

Perhaps the greatest political controversy that has grown out of the attack is that July 2014 flight from Saudi Arabia to California. Why was Tashfeen Malik allowed into the country? Was there really no indication or warning that she would go on to help launch an act of terrorism on behalf of ISIS? No way to evaluate or predict her sympathies to jihadism?

It’s a question that gets to issues of cyber monitoring and policing, as well as to much hazier and less well-understood questions of how people “radicalize” to the point of supporting terrorism. It’s also a question that’s been confused by wildly conflicting accounts of what happened and when. Finally, it’s a debate that raises some hard truths about domestic terrorism that Americans don’t want to admit: In some cases, perhaps including this one, they simply may not be preventable — much like the non-terror-related mass shootings that have plagued this country for years.

What follows is an explanation of what’s known currently, what it means, why it matters, and how to evaluate the subsequent political controversies.

When did the San Bernardino attackers first express sympathy for terrorism?

On the surface, much of the controversy turns around a simple question of timing: Did Malik or Farook express any sympathy for terrorism or for ISIS before they launched the attack? Or, more damningly, before Malik was granted her July 2014 visa to enter the United States?

There is, as yet, no indication that either Malik or Farook publicly or overtly expressed any sympathies to terrorism at any point before the attack. However, the FBI says they did discuss “jihad and martyrdom” in private messages in late 2013.

It can help clarify all this to look at it as a simple timeline:

How this story got confused — and became a major controversy

The story said that Malik had publicly declared her desire to commit acts of terrorism before even arriving in the US. That story now appears to perhaps be false, but it may be too late, as its allegations have entered the public and political consciousness and are likely to remain there.

Here is how the story opens, with what appears to be a damning account of the government’s failures:

WASHINGTON — Tashfeen Malik, who with her husband carried out the massacre in San Bernardino, Calif., passed three background checks by American immigration officials as she moved to the United States from Pakistan. None uncovered what Ms. Malik had made little effort to hide — that she talked openly on social media about her views on violent jihad.

She said she supported it. And she said she wanted to be a part of it.

But on Wednesday, FBI Director Comey said the story was false: “So far, in this investigation we have found no evidence of posting on social media by either of them at that period in time and thereafter reflecting their commitment to jihad or to martyrdom. I’ve seen some reporting on that, and that’s a garble.”